While volatility has heightened recently, we believe that emerging-market (EM) fundamentals remain sound. We believe EM equities have reached an inflection point in regard to earnings and appear to be providing us with valuation opportunities we do not generally see in most developed markets. Our view is that earnings should continue to recover and prompt valuations to return to a more normalized level. Discounted valuations are one of several trends that underpin the upside potential we see in emerging markets today. Other positive trends include undervalued EM currencies and lower EM debt levels.

Meanwhile, emerging markets have doubled their share of global gross domestic product (GDP) over the past 30 years and now amount to 60% of global GDP growth.1

Global markets experienced a selloff in February as worries of resurgent US inflation outweighed initial optimism about an improving world economy. Volatility spiked as investors assessed the likelihood of major central banks stepping up the pace of monetary policy tightening. Emerging markets recorded a sharp but brief correction before rebounding in the latter part of the month to recover some of the losses. As a group, emerging markets finished slightly behind their developed-market counterparts in February. The MSCI Emerging Markets Index declined 4.6%, compared with a 4.1% correction in the MSCI World Index, both in US dollars.3 Higher risk aversion, lower oil prices and weaker EM currencies weighed on EM equities. 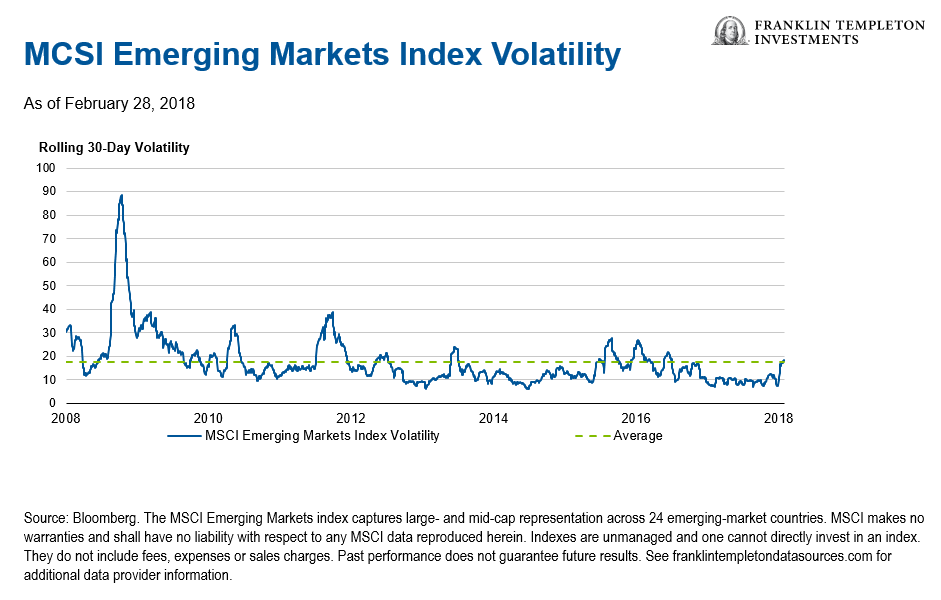 The Most Important Moves in Emerging Markets in February

In Asia, most markets lost ground amid the global stock market rout. India, China and South Korea posted the largest declines. India was particularly hampered by the government’s reintroduction of a long-term capital gains tax on equities. A move by three local stock exchanges to end licensing deals with their foreign counterparts and rein in offshore derivatives also hurt sentiment. In China, slower-than-expected growth in manufacturing activity in February raised caution around the country’s economic momentum. Conversely, Thailand finished higher. The country’s exports surged past forecasts in January to notch their fastest rate of growth in more than five years, underpinning the government’s robust economic outlook for the year.

Latin American markets corrected over the month, but as a group they performed better than their EM counterparts. Brazil and Peru were among the leading regional performers, while Colombia and Mexico lagged. Depreciation in the real accounted for the decline in the Brazilian market as lower-than-expected inflation, strong economic activity and a reduction in the benchmark interest rate to a record-low level provided investors with reasons to maintain a positive view and overlook disappointing fourth-quarter GDP growth data. In Mexico, lower manufacturing and consumer confidence data coupled with monetary policy tightening weighed on equity prices. A decline in oil prices impacted stock prices in Colombia, despite a strengthening peso.

Central and Eastern European markets were among the worst EM performers with Poland, Hungary and Greece especially weak. The Turkish market also declined but outperformed its EM peers, as attractive valuations and earnings growth supported investor confidence. Russia bucked the global trend, ending February with a gain following a recovery in equity prices in the latter part of the month, driven by higher earnings growth prospects and undemanding valuations.

South African and Egyptian equities edged down in February but fared better than their EM peers. Investors cheered the swearing-in of African National Congress (ANC) leader Cyril Ramaphosa as South Africa’s new president following the resignation of Jacob Zuma. A cabinet reshuffle that brought back Nhlanhla Nene as finance minister and Pravin Gordhan as public enterprises minister was also well-received. The Central Bank of Egypt adopted an easing monetary policy in February, with a larger-than-expected 100 basis-point interest-rate cut, thus providing the market with the hope of accelerating GDP growth with decreasing inflationary pressures.

In February, frontier markets outperformed their EM counterparts, driven by fund inflows and improving earnings growth. Kazakhstan, Kenya and Kuwait were among the top frontier-market performers, recording positive returns. In contrast, Argentina was among the weakest, impacted by profit-taking after strong performance in 2017, concerns surrounding wage negotiations and inflation, as well as plans to scale back and delay labor reforms.

1. Source: International Monetary Fund, “GDP based on PPP, share of the World,” data as of October 2017.

2. Source: International Monetary Fund World Economic Outlook Update, January 2018. There is no assurance that any estimate, forecast or projection will be realized.

3. The MSCI Emerging Markets index captures large- and mid-cap representation across 24 emerging-market countries. The MSCI World Index captures large- and mid-cap representation across 23 developed-market countries. MSCI makes no warranties and shall have no liability with respect to any MSCI data reproduced herein. Indexes are unmanaged and one cannot directly invest in an index. They do not include fees, expenses or sales charges. Past performance does not guarantee future results.