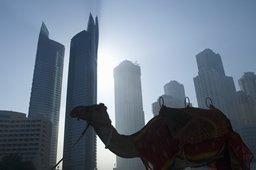 The investable Middle East/North Africa region known as “MENA” encompasses 11 diverse countries, extending from Oman to Morocco, and also includes Bahrain, Egypt, Jordan, Kuwait, Lebanon, Qatar, Saudi Arabia, Tunisia and the United Arab Emirates (UAE). I recently had the pleasure of returning to Dubai, the largest city in the UAE, a truly striking and cosmopolitan city with a diverse population from around the world. Even though geopolitical issues have plagued some MENA countries over the past couple years, the UAE has drawn investor interest due to its relative stability compared with some other frontier markets in the region, and because of its generally good economic prospects. The UAE is a compelling investment destination and proof that you can’t paint the region with the same brushstroke.

Things are looking up in the UAE, and not only the skyscrapers rising from its desert sands. Index provider MSCI announced it would reclassify the UAE (along with Qatar) from frontier market to emerging market status, commencing in May of this year. The most significant potential benefit of this reclassification could be the dose of added confidence it may give investors. We think this could boost portfolio inflows, with the entry of foreign institutional investors and passive or index-tracking investors. The prospect for additional liquidity may provide policymakers with an ongoing impetus to reform their markets—which we have already seen taking place. Among the reforms under discussion is the possible merger of the UAE’s two stock markets: the Abu Dhabi Securities Exchange Market (ADX) and Dubai Financial Market (DFM).

I think the UAE’s future looks bright for a number of reasons. For ease of doing business, the UAE is one of the best in the region; the World Bank’s 2014 index ranks it 23rd among 189 countries in this regard.1 The UAE is a member of the Gulf Cooperation Council (GCC), along with Bahrain, Saudi Arabia, Oman, Qatar and Kuwait, a grouping which I believe could surprise on the upside in terms of growth rates in the years ahead. For 2014, the International Monetary Fund forecasts GDP growth for the UAE at 3.9%.2 Tax rates are generally low in the GCC, and the UAE is a standout in this regard. In Dubai, income tax is zero and profits are taxed at zero which makes things very attractive not only for individuals but for companies. Each of these countries pegs its currency to the US dollar except Kuwait, which pegs to a basket or group of currencies, so the impact of the US Federal Reserve’s slowing or ending of its longstanding asset-purchasing program on these currencies should be more muted than in some other emerging markets.

Dubai has also set its sights on becoming a global center for Islamic finance, which features Shariah-compliant investment vehicles. I think this development is only in its infancy, as there is much interest in these products globally.

After a boom in 2008 and a crash in 2009, the real estate market in Dubai has recovered. Projects are on the rise along with real estate prices; home prices in Dubai surged 21% in the third-quarter 2013 on a year-on-year basis, after increases of 18% in the second quarter and 18% in the first.3 Is Dubai’s real estate market headed for a bubble? While this is a valid concern, right now I still see good demand as investors from Saudi Arabia, Iran, Egypt, India, Pakistan and other parts of the Middle East as well as other parts of the world have come to Dubai in increasing numbers. The government is aware of the possibility of a bubble, and is being cautious. Compared with 2008, the real estate boom in Dubai today looks more solid, in part because measures have been put in place to limit speculation, including limits on mortgages. Most purchases during the prior crash were bank financed and off plans, not completed buildings. This time, most transactions are cash-based, and apartments are built and ready for individuals to move in. Who’s buying? The largest buyers are from other GCC countries, evident in the license plates of vehicles parked in Dubai shopping malls and other centers. After the GCC real estate buyers, the next-largest groups are from the subcontinent, namely India and Pakistan, followed by Jordan, Lebanon and Syria, along with Egyptians and other North Africans. The Russians and Iranians have also been investing, and the Chinese have become big real estate buyers in Dubai, too.

The current permanent population of the UAE is roughly nine million, and of that, two million are in Dubai. However, 11 million visitors enter Dubai alone each year, so permanent residents are the minority. People representing hundreds of different nationalities are living in Dubai today. While dining at a French restaurant there, my team and I learned our waiter was from Guinea, but was raised in France. At other dining spots, we encountered workers from Uzbekistan, Russia, Brazil and the Ukraine. At our hotel health club, the attendant was from India. This is what Dubai is all about now – a really cosmopolitan city attracting people from all over the world. I get inspired every time I visit.

Dubai Sets its Sights on the World

While my team and I were in Dubai, it was announced in a most dramatic fashion that the city had won the rights to host the 2020 World Expo, beating Izmir, Turkey; Sao Paulo, Brazil; and Yekaterinburg, Russia. I heard a loud bang and jumped out of my seat as fireworks exploded all over the Burj Khalifa, the world’s tallest building and—in my opinion—the most beautiful. From the bottom of the building to the top, fireworks were flying from the balconies at every level. What a spectacular show! Then blue lights covered the building, symbolizing Dubai’s Expo-themed color. Dubai is reportedly putting a lot of effort and resources into making the event a big hit with international visitors.

On New Year’s Eve, the same building ushered in 2014 with an even more impressive fireworks display, which attracted visitors from around the world and captivated many more watching it at home.

I think this global melting pot known as Dubai should see even more visitors, and investors, as it rises in importance on the global stage in the years to come.