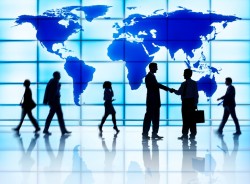 The Templeton Emerging Markets Group has seen growing consumer demand as a key theme in the development of emerging-market economies and equity markets for some time, including the even lesser-developed frontier markets. Within this theme, we regard the expansion of demand for not just products but also consumer services as particularly interesting. Our research metrics have been uncovering a growing class of emerging market-based service businesses and we believe the growth potential for emerging and frontier market services could be substantial.

According to the World Bank, more than 70% of the economic activity of “high income” countries was generated through services in 2012.1 For “low and middle income” countries, equivalent to emerging and frontier markets, the figure was 53%.2 Emerging-market service businesses could thus potentially benefit not only from underlying economic growth but also from convergence with the share of services within developed-market economies, in our view.

China has an unusually small share of services that comprises its  gross domestic product (GDP)—at 45% in 2012, the share was equal to the size of the country’s industrial sector—but it is not unique. In Indonesia, for example, services represented only 39% of GDP in 2012, while in Nigeria, a frontier market in Africa, the figure was just 26%.3 We believe that opportunities for investment exist across a wide range of service activities for these markets. Retail is a notable case in point, with convenience stores and supermarket chains in many countries growing by taking market share from individual stores and from informal trading activities, profiting through economies of scale and efficient management.

Discretionary spending can increase disproportionately as consumers grow wealthier, and we have identified niche operations in areas such as jewelry and cosmetics that have had growth in sales and earnings far stronger than we think are implied by their relatively modest valuations. Rising emerging-market per-capita wealth has also increasingly been providing the resources for increased leisure spending, and we have noted opportunities across various entertainment businesses.

For example, 2013 saw dramatic sales growth for entertainment and resort businesses in the Chinese special economic region of Macau. Improved transport links with the rest of the country, combined with the development of new hotel and leisure facilities on the reclaimed land of the “Cotai Strip,” encouraged a sharp rise in tourist visits to the resorts. Tourism within mainland China has also been growing, with regimented and regulated package tours increasingly supplanted by individual travel, creating a new industry dynamic.

We regard financial services as another potentially large growth area within emerging-market services, as the appetite among consumers for savings products and borrowing should begin to grow. We see a theme across emerging and frontier markets of well-managed banks repositioning their lending activities away from state enterprises and government bodies and instead toward consumers and small businesses. We believe insurance companies, too, may see more business as rising wealth and aging populations drive demand for products such as pensions and health insurance. In our opinion, moves to strengthen social safety nets that were featured in China’s recent reform proposals could well generate considerable growth in demand for insurance products.

Telecommunications companies have seen strong growth across emerging and frontier markets, with mobile services being particularly strong. Customers in many of these markets, especially in Africa, have been enthusiastic adopters of mobile technology, effectively bypassing traditional landline systems.

Perhaps the most exciting services field, in our view, is that connected to the development of the Internet. With legacy brick-and-mortar assets relatively scarce in many emerging markets, adoption of Internet-based trading has been rapid in many service industries. Latin American Internet trading platforms, Chinese online travel and ticketing businesses and African mobile money transfer businesses are examples of traditional service businesses adapting themselves to the online age. Chinese-language Internet portals have seen dramatic growth, as search engines and other value-added service businesses have benefited from the Chinese government’s reluctance to admit their US equivalents. Chinese consumers have been highly active adopters of mobile Internet services and games, which in our view have provided a potentially large revenue stream to these businesses.

We are excited about the next wave of potential opportunities in the future for the service industry, as we think the power of the emerging market consumer should continue to grow.

Dr. Mobius comments, opinions and analyses are for informational purposes only and should not be considered individual investment advice or a recommendation to invest in any security or to adopt any investment strategy.  Because market and economic conditions are subject to rapid change, comments, opinions and analyses are rendered as of the date of the posting and may change without notice. This material is not intended as a complete analysis of every material fact regarding any country, region, market, industry, investment or strategy.