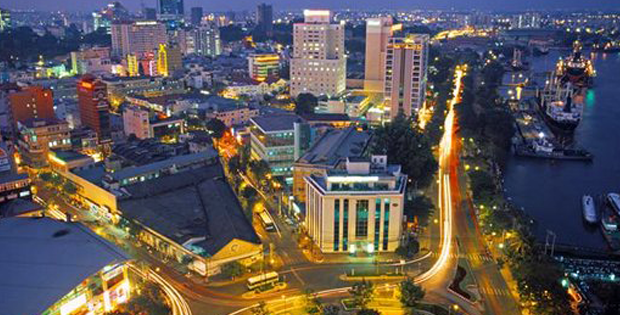 After more than two years of negotiations, the European Union (EU) and Vietnam reached an agreement in principle for a new free trade deal.1 Our team believes this deal marks an important milestone not only for Vietnam, but sets an important precedent for other countries in Southeast Asia, a region of particular interest to us.

Vietnam has experienced a drop in exports this year—which some have said may have contributed to a devaluation of its currency, the dong, for the third time this year in August. With that backdrop, this trade deal with the EU could prove even more important for Vietnam.

The new trade agreement means Vietnam’s exports could see a boost amid broader access to the EU—whose member-countries collectively represent one of the largest economies in the world.2 Vietnam’s key exports to the EU include telephones and parts, electronic products, footwear, textiles and clothing, coffee, rice, seafood and furniture, while the EU exports primarily high-tech products including electrical machinery and equipment, aircraft, vehicles and pharmaceutical products to Vietnam.3

I think part of Vietnam’s impetus for this deal is to lessen the country’s dependence on China, its largest trading partner. There have been some tensions recently between the two countries over drilling rights in waters claimed by both countries as their exclusive territory. Additionally, the recent weakening of China’s yuan (devalued in August) would make Vietnam’s exports even less competitive and could further worsen its trade balance. We see Vietnam’s subsequent currency devaluation as a necessary measure in light of the fact that the dong had been much stronger than some other currencies in the region.

Other important aspects of the trade deal may be of interest to international investors. Besides eliminating tariffs, Vietnam will also remove almost all of its export duties. Vietnam is not only focused on traditional export drivers such as commodities; it has been opening up new market access opportunities in services and investments.

In general, political progress—or the lack thereof—can be a key factor in unlocking economic potential in Asia. While Vietnam remains a Communist-ruled country, its leaders seem to be embracing capitalism, at least in some respects. Vietnam’s recent removal of limits on foreign investment in many areas (which had been capped at 49% of a listed company) looks encouraging to us. Its government has also been focused on developing a strong technology sector in particular, offering financial incentives and tax breaks.

Vietnam is clearly attracting investor interest. While its market is still relatively small, it may come as a surprise that Vietnam was second only to China as the most-popular investment destination in the Asia-Pacific region, as of 2014.4 Bordering China, the country has strategic importance in the region, and offers a number of positives that have attracted this interest, including low-cost labor, strong domestic growth potential and a youthful demographic. Chinese firms are already active investors in Vietnam, taking advantage of significantly lower wage rates in comparison with Southern China.

As investors in Vietnamese stocks, the primary constraints we face are liquidity and limited choices in which to invest. But we are hopeful that soon will change. Vietnam has had a fast-growing economy, and we have found good companies there, including some that are state-owned. More importantly, we have also found companies with attractive valuations in Vietnam. Currently, state-owned enterprises account for 40% of Vietnam’s gross domestic product (GDP),5 but authorities have affirmed a commitment to a more modern and open economy, which we hope will lead to more privatization.

The middle class has been growing in Vietnam and people have also been trading in bicycles for motorcycles, scooters and automobiles. To help alleviate the traffic on busy city streets, Vietnam’s first-ever subway system has been under construction in Ho Chi Minh City with the help of foreign investment from Japan, France and China. Consumers have also been embracing new technologies the EU can sell to them; Vietnam ranks 10th globally in terms of the number of mobile phone subscriptions, ahead of Germany, Thailand and the United Kingdom, among others.6

While it is clear there has been progress, Vietnam’s transformation has been slower than we’d like. In 2012, Vietnam unveiled a broad, “three pillar” economic reform program, proposing to restructure public investment, state-owned enterprises and the banking sector, but progress in many areas has been slow. Additionally, Vietnam’s banking sector is undercapitalized, while non-performing loans weigh heavily on banks and businesses.

In my view, this new trade agreement between Vietnam and the EU is also quite significant for the ASEAN Group (Association of Southeast Asian Nations) because it seems likely to us that other countries in that grouping will also join in this trade liberalization movement, which could benefit the entire region. Singapore already has a free trade agreement with the EU and other ASEAN members including Thailand, Myanmar, Cambodia, Laos, Indonesia, Brunei, and the Philippines would also likely benefit. So, this agreement is quite positive, and a good move by the Vietnamese.

Vietnam offers many of the key characteristics that make Southeast Asia generally such an attractive destination to global investors like us. In addition to natural resources, the region contains pockets of advanced technology, notably in Singapore and parts of Thailand and Malaysia, as well as some world-class banking and telecommunications businesses. Per-capita income across much of the region is low, especially in countries such as Laos, Cambodia and Myanmar, which have only recently begun to transition to market economic structures, providing opportunities for low-cost manufacturing businesses.

Many Southeast Asian countries also have very favorable demographic profiles, with large working-age populations, while economic restructuring in a number of countries, most notably Indonesia, has the potential to raise productivity and corporate profitability. In addition, lying between China and India on one of the world’s busiest trade routes, Southeast Asia is likely to benefit significantly should various other free trade initiatives come to fruition. Within Southeast Asia itself, the planned ASEAN Economic Community could create a market of 600 million people, combining the diverse resources of the region, which we believe should be to the benefit of all.

Our research suggests the presence of many well-managed businesses in Southeast Asia whose valuations are below those implied by our assessment of their longer-term prospects. We are looking forward to finding more opportunities in this region—including Vietnam.

Mark Mobius’s comments, opinions and analyses are personal views and are intended to be for informational purposes and general interest only and should not be construed as individual investment advice or a recommendation or solicitation to buy, sell or hold any security or to adopt any investment strategy. It does not constitute legal or tax advice. The information provided in this material is rendered as at publication date and may change without notice and it is not intended as a complete analysis of every material fact regarding any country, region, market or investment.

Data from third-party sources may have been used in the preparation of this material and Franklin Templeton Investments (“FTI”) has not independently verified, validated or audited such data. FTI accepts no liability whatsoever for any loss arising from use of this information and reliance upon the comments, opinions and analyses in the material is at the sole discretion of the user. Products, services and information may not be available in all jurisdictions and are offered by FTI affiliates and/or their distributors as local laws and regulations permit. Please consult your own professional adviser for further information on availability of products and services in your jurisdiction.