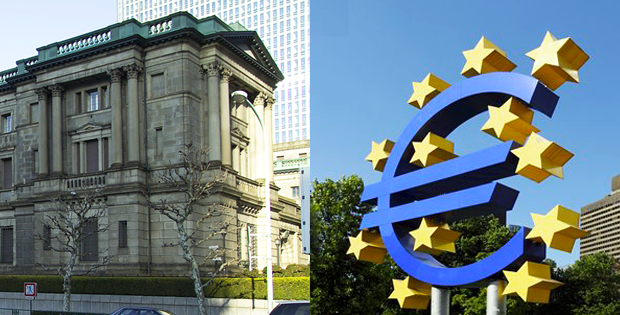 This month, there are several key central bank monetary policy meetings taking place around the world, including those of the European Central Bank (ECB), Bank of Japan (BOJ), Bank of England (BOE) and the US Federal Reserve (Fed). While the Fed has been moving toward a tighter monetary policy, many global central banks remain highly accommodative—some even pushing interest rates negative. I thought it might be an appropriate time to examine the consequences of unconventional monetary policy pursuits, particularly negative interest-rate policies.

While Fed policymakers have recently indicated a negative-rate policy isn’t a constructive option for the United States right now—and in fact, market observers expect the Fed to hike rates this year—there is growing concern regarding the pursuit of negative interest rates by central banks including the BOJ and the ECB and others in Europe. An important criticism of the low-rate environment we are in is that many people who want to save their money in a bank to gain interest wind up paying the price—particularly when inflation is factored in. Instead of earning interest on their deposits, they are essentially charged money to keep it in the bank!

More importantly, while a number of central banks have pushed interest rates lower and lower in a bid to boost economic growth, these measures haven’t yet proved effective in a meaningful way. The theory is that by discouraging (some would say punishing) people and organizations from keeping cash on deposit, it would encourage them to spend instead. With low or negative rates on deposits, the hope was that banks would also be encouraged to lend aggressively, and we haven’t really seen that either. The global economy is not roaring ahead despite the huge money-printing taking place and the extremely low interest rates in the major economies. The ECB first made the move to negative rates in 2014; Denmark, Sweden, Switzerland and Japan followed. So we are now in a situation where private banks in those countries must pay the central bank to keep their money on reserve, and investors who purchase government bonds must pay those governments for the privilege of lending the government money.

I’m not alone in expressing my view that negative-rate policies are not creating the positive results that had been hoped for—at least in some key aspects. The negative rates are shrinking bank profit margins and thus, making them reluctant to lend. Many people who would normally deposit their money in the bank now simply keep their cash in safe deposit boxes or under the floorboards. The lack of interest earnings make people who are not able to invest the money elsewhere feel that they are financially disadvantaged.

Many pension funds are in trouble since the safety they sought from government bonds normally held in their portfolios has not been earning any yield to speak of, and some are forecasting they will not be able to meet their obligations to pensioners in this prolonged low-rate environment. The result is a search for yield among those institutional investors, leading them to more toward risky bonds and equities. This, some observers fear, could lead to another financial market bust if the risky investments come home to roost.

There is another aspect to these developments: currency competition. Lower interest rates available in any particular currency would tend to cause investors to flee that currency in search of higher interest rates. Governments wanting to be competitive in the global marketplace for goods and services thus encourage the currency weakening. This could lead to what may be termed “currency wars,” a “beggar-thy-neighbor” policy that can lead to political tensions when countries devalue their own currencies in an effort to compete with others. Of course, these developments can lead to great volatility and uncertainty.

It remains to be seen when the Fed finally raises interest rates if there will be a reaction in other major markets by other central banks. In terms of the global economic impact of these rate divergences, if other central banks hold fast to their easing policies and perhaps even accelerate them, those actions could offset the impact of the Fed’s tightening. The markets seem to have already factored in a Fed tightening this year and in my view, a small rate hike will not likely have a notable market impact. However,  if US interest rates move up more quickly (one percent or higher) then I think the impact on global markets could be greater and trigger other global central banks to react.

That said, the current central bank negative-rate policies don’t appear to be working as hoped (at least in the areas I noted here), so there is a possibility that banks will resort to what some have dubbed “helicopter money,” which is to drop money directly into the pockets of consumers to bypass the reluctant banks and encourage people to spend. Under such conditions of uncertainty and unconventional stimulative measures, confidence tends to deteriorate and business leaders develop a reluctance to move forward and invest. This can actually do the opposite of what these efforts intend; they can actually prolong or exacerbate a growth slowdown in an economy.

In the short term, the search for yield is resulting in more money flowing into the higher-yielding emerging-market equity and bond markets, resulting in the recent outperformance of those markets. From our team’s perspective, that is certainly not something we would complain too much about! However, we must be mindful of the macro developments engendered by unconventional central bank policies which could have unforeseen consequences for many investors.