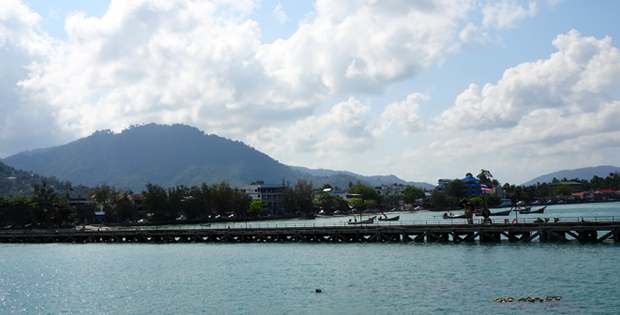 Air travel is a quick and convenient way to get from one place to the next, but sometimes it’s nice to slow down and enjoy the journey. Traveling by sea gives you time to contemplate what you’ve seen at different ports of call, from sleepy seaports to bustling shipping and shopping centers.

I recently embarked on an ocean voyage to the countries of Thailand, Cambodia and Vietnam in Southeast Asia, a region we’ve been quite interested in since we first started investing in emerging markets in 1987.

My colleagues and I departed from Singapore and our first stop was Koh Samui, Thailand’s second-largest island after Phuket. It took about 14 hours to reach Koh Samui, where I hoped to gain insight into Thailand’s thriving tourist industry. The island is almost exclusively dependent upon tourists, although it also has a fishing industry as well as coconut and rubber plantations.

While small in size and population, Koh Samui offers magnificent scenery. Tourists from mainland Thailand and other parts of the world are attracted to its beautiful sandy beaches, coconut trees, balmy tropical weather and clear blue waters.

While more than a million people arrive at the island’s airport each year, my colleagues and I docked at the main port of Nathon, which is also the center of the island’s fishing industry. I also noticed car/passenger ferries connecting the island to the Thai mainland there.

A stream of small-boat traffic in addition to huge luxury liners and high-speed catamarans jetting passengers to Bangkok and other Thai ports provided an indication of the state of the island’s economy. Thailand’s rate of economic growth has been lagging that of some of its neighbors in the region over the past few years, so I was keen to see if things seemed to be picking up and where there may be potential investment opportunities.

In Nathon town, I explored the many small shops selling souvenirs as well as open-market stalls selling a variety of tropical fruits for which Thailand is famous. There was even a very well-equipped gym catering to locals and tourists.

There were a few small hotels in town, with larger hotels scattered along the coast on other parts of the island, including a luxury resort catering to affluent foreigners.

Tourist sites included beautiful waterfalls and an enormous Buddha statue where people were paying homage not only to Buddha but also to Guanyin, the Goddess of mercy and compassion.

I’m a history buff, so I was interested to learn the very first settlers to the island were fishermen from the Malay Peninsula and southern China. Until the late 20th Century, the island was largely a self-sufficient community with little connection to the Thailand mainland.

After leaving Koh Samui, we headed to Bangkok’s main port, Laem Chabang, where a major infrastructure expansion has been underway. The busy port, seen as a gateway to Southeast Asia, is able handle the largest vessels. It has container facilities capable of handling over six million twenty-foot equivalent units (TEUs), a unit of cargo capacity. Let’s just say it’s very large! The port is even capable of hosting aircraft carriers.

Although it’s a port town with most of the businesses revolving about shipping in addition to an oil refinery, efforts have been made to promote Laem Chabang as a tourist center and alternative to the famous beach resort of Pattaya.

Next, we cruised on to Cambodia, considered a frontier market.

In our view, frontier markets could offer exciting long-term investment opportunities, given robust fundamentals, including strong economic growth, access to resources and favorable demographic profiles, with additional possible benefits from improvements in technology, infrastructure and standards of governance. Additionally, market valuations for frontier corporations generally stand below those of their peers in developed markets.

Cambodia has been experiencing particularly strong gross domestic product (GDP) growth, up more than 7% in 2015 and 2016 and estimated to rise 6.9% this year.1 Cambodia has been opening up its economy and foreign investment has been on the rise.

Many Western apparel and footwear companies in particular have set up shop in Cambodia, where labor costs are low and the population youthful. The garment and footwear industry is a key economic driver for the country and source of employment, along with tourism.

I’ve always been particularly fascinated with India’s influence in Cambodia—which goes back to ancient times. The central temple complex in Angkor Wat was originally a Hindu temple dedicated to Vishnu and later converted to a Buddhist temple. Today, Buddhism remains the dominant—and official—religion in Cambodia.

In 1863, the Cambodians allowed the country to become a French protectorate and part of the French Indochinese administration which included Vietnam and Laos. Cambodia declared independence in 1953, but it wasn’t all smooth sailing.

In 1975, the Khmer Rouge conquered the capital Phnom Penh and installed the brutal Pol Pot regime, which started a massive extermination campaign of people deemed to be a threat, including many intellectuals. There are a number of estimates, but some say as many as three million Cambodians died—nearly half the population—in an attempt to wipe out any vestige of western civilization and return the country to an 11th Century agrarian model.

Finally, a treaty signed in 1991 brought peace and opened the door to progress. Since then, the country has undergone a dramatic transformation into the modern era.

We at Templeton Emerging Markets Group have been quite interested in Vietnam as an investment destination for quite some time, and given the tremendous progress the country has made we see more potential opportunities ahead.

There have been a wave of privatizations in Vietnam, which has opened up new opportunities for investors and provided a tailwind for its equity market. After a strong performance in 2016, the benchmark Vietnam Ho Chi Minh Stock Index is up more than 7% year-to-date as of April 18.2

My colleagues and I visited a conglomerate company in Vietnam engaged in a number of activities such as steel, steel pipe, construction equipment, furniture, cement, real estate and even animal-feed production. We got a good sense of a wide range of market sectors and found the management team capable and open to foreign investment.

Given Vietnam’s high rates of economic growth, we felt demand prospects generally looked good across many areas of the economy. In 2016, Vietnam experienced GDP growth of 6.2%, while GDP growth is forecast at 6.5% this year.3

My short trip through the waters of Southeast Asia indicated to me that Thailand, Cambodia and Vietnam were progressing nicely not only on the tourism front, but also in the industrial arena. I look forward to further exploring potential investment opportunities in these countries in more detail.
The comments, opinions and analyses presented herein are for informational purposes only and should not be considered individual investment advice or recommendations to invest in any security or to adopt any investment strategy. Because market and economic conditions are subject to rapid change, comments, opinions and analyses are rendered as of the date of the posting and may change without notice. The material is not intended as a complete analysis of every material fact regarding any country, region, market, industry, investment or strategy.

1. Source: IMF World Economic Outlook database, April 2017. There is no assurance that any estimate, projection or forecast will be realized.

2. Source: Bloomberg. Indexes are unmanaged and one cannot directly invest in them. They do not include fees, expenses or sales charges. Past performance is not an indicator or guarantee of future performance.

3. Source: IMF World Economic Outlook database, April 2017. There is no assurance any estimate, projection or forecast will be realized.