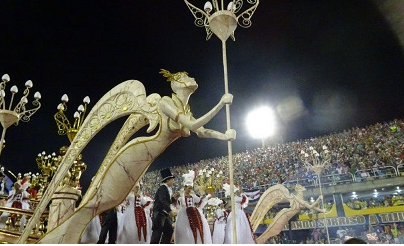 This post is also available in: French, German, Italian

I visited Brazil in the spring of this year, but wanted to go back and explore more areas of the country. Brazil has faced some hard times but appears to be bouncing back from a prolonged recession, so I was interested to gauge the mood of the people and businesses there.

I had my reservations about flying in a small prop plane amid rainy weather to the town of Sobral in northeastern Brazil, but the short flight turned out to be smooth and my colleagues and I landed at the small airport without incident.

Our itinerary included visiting a shoe manufacturer in the area. The company’s huge complex included a number of large buildings and we spent the entire day looking at the company’s operations. The raw materials for its polyvinyl chloride (PVC) footwear included the plastic and plasticizers from Brazilian and international suppliers. It was fascinating to watch as the PVC was fed into 230 injection machines operated by thousands of workers. I was surprised to learn about all the hundreds of different shoe designs, some of which were created by famous designers across the globe.

The plant is very important to the community where it is based, key to its economy and responsible for a large share of employment there. We asked how it was possible for the company to compete with Chinese manufacturers and other footwear manufacturers benefitting from very low-cost labor. We calculated that the cost per worker was likely above that of China.

The northeast part of Brazil is considered an underdeveloped area, so the government granted a number of tax concessions to the company. In addition, Brazil also levies a very high tax on imports of plastic shoes, so imported shoes are more expensive.

The company we visited does export its footwear, which has unique designs and competitive pricing. Entering the factory, we noticed machines made in a number of different countries including Italy, Spain, Germany and China. Some of the equipment was very sophisticated. For example, the company had injection-molding machines capable of injecting two colors.

For printing designs on the shoes, there was a sophisticated machine which automatically sprayed various colors on the shoes with great precision, replacing an old system of using hand-operated silkscreens. In many parts of the plant we visited, we saw robots handling tasks such as picking up shoes from the assembly line and stacking them into boxes. In the warehouse, the company also had installed sophisticated systems to read bar codes on boxes and sort them according to their destination.

In a warehouse with a very high ceiling, pallets with boxes of shoes were lifted and placed in rows and rows of steel shelving using electric-powered forklifts capable of lifting boxes as high as six stories. This proved another example of a general theme we’ve been following—how technology is changing the way many companies in emerging markets do business.

Sobral is a small city, but boasts a number of institutions, including public universities, private colleges and a medical school. Interestingly, the city became famous when British scientists observed a solar eclipse there in 1919, offering the first proof of Albert Einstein’s theory of general relativity published in 1916. There is a museum in the city dedicated to that event.

São Tomé e Príncipe on the west coast of Africa was another site from where the eclipse could have been seen, but the visibility there was not as good on May 19 as it was in Sobral. On his trip to Brazil in 1925, Albert Einstein said that “the idea that my mind conceived was answered by the bright sky of Brazil.”1

Founded in 1772, Sobral sits on the Acaraú River, which was a major waterway that bought colonizers to the area. Cattle raising was one of the first industries to develop there, and the production of salted and dried beef jerky was an important export product, in addition to sugar. At that time the city was three times larger than Fortaleza. Cotton also grew in importance, boosted during the US Civil War when cotton production in the southern United States declined and the demand from England was filled by cities like Sobral.

Sobral has a railway station which was part of a rail line Emperor D. Pedro II commissioned in 1878 to relieve victims of a devastating drought. The railway facilitated the shipment of goods to and from the port of Camocim. Once a road was built between Sobral and Fortaleza in 1949, Fortaleza began to flourish and dominate northeastern Brazil’s Ceará state. Sobral’s rail station was closed in 1977 when the national government decided to pursue a policy favoring road transport, resulting in the dismantling of many railways in Brazil. However, the National Historic and Artistic Heritage Institute (IPHAN/CE) designated Sobral a national historic site, which encouraged the restoration of its older buildings, including the rail station.

In any case, I thought it was wonderful to see how a local company could become a world leader in a particular industry—plastic shoes. Returning to Singapore, I even spotted a shop dedicated to the shoes manufactured by the Brazilian company I’d just visited, and they seemed to be selling quite well.

Looking at the bigger picture, Brazil has only recently emerged from a prolonged recession and its challenges, including corruption scandals plaguing government and corporations, are certainly well known. However, Brazil’s economy is large and holds many potential opportunities for investors amid a backdrop of improving fundamentals. In December, Brazil’s central bank cut its key interest rate, the selic, to a record low of 7%, and lowered its inflation forecasts for 2017 and 2018. And, growth is expected to continue to pick up; the International Monetary Fund is forecasting growth of 1.5% in 2018 and 1.9% in 2019.2

I have found that Brazilians are usually optimistic, and that was the case on this trip as well.  Like the weather in their country, they usually have a sunny disposition and an attitude towards life which does not take things too seriously. They seem willing to live for the day and not worry too much about what happened in the past and what could happen in the future. So, on this visit, I found the general attitude of the people I encountered was still bright, despite all the problems their country had faced.

With continued emphasis on reform efforts, we remain optimistic that Brazil can continue on a more positive path in 2018 and beyond.

2. Source: IMF World Economic Outlook Database, October 2017. There is no assurance that any estimate, forecast or projection will be realized.