Volatility hit global equity markets hard in the first quarter of 2018, and emerging markets were certainly not immune. Franklin Templeton Emerging Markets Equity CIO Manraj Sekhon and Chetan Sehgal, senior managing director and director of portfolio management, present the team’s overview of what has happened in the emerging-markets universe in the first quarter of 2018, and offer their perspective on the potential impact of recent US-China trade tensions. 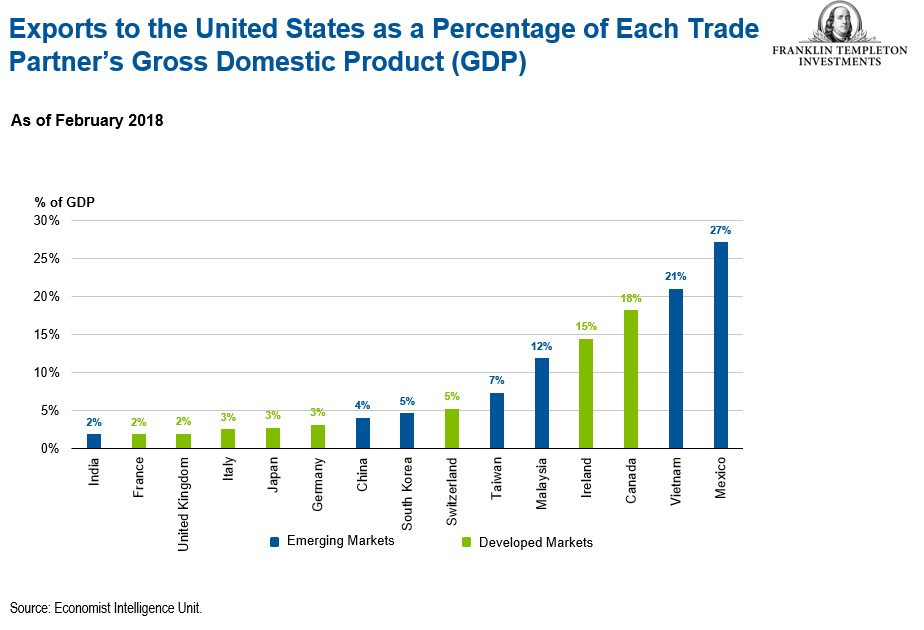 We believe prospects for emerging markets remain sound despite the recent increase in volatility. Emerging markets have historically bounced back from external shocks, and they displayed a healthy resilience amid choppy trading in early 2018. We still see strong tailwinds underpinning emerging-market equities even as we are mindful of the challenges that may arise.

Importantly, emerging-market economies look poised for further growth. The International Monetary Fund estimates 4.9% GDP growth for emerging markets in 2018, up from 4.7% in 2017.1 While protectionist trade actions taken by the United States have cast a shadow over the synchronized global growth that has lifted stock markets, the long-term outcome remains to be seen. The scope and strength of international trade flows should not be underestimated, as evident by the historical growth in intra-Asia trade.

We believe that the key drivers for emerging markets—IT and consumerism—remain intact. EM companies have not only embraced the use of technology but have also become global innovators in many areas, ranging from e-commerce to mobile banking, robotics, autonomous vehicles and more. Rising wealth in emerging markets is another secular driver. We expect demand for goods and services to continue growing as incomes head higher. And as consumers meet their basic needs, aspirational wants usually follow. This “premiumization” trend could boost demand for high-end items such as luxury cars or for services such as entertainment and wealth management.

Global markets started 2018 on a high note, but a slowdown in global growth momentum and concerns about a potential trade war between the United States and China weighed on market sentiment later in the quarter, curbing January’s gains. Emerging markets as a group, however, ended the quarter in positive territory, outperforming their developed-market counterparts. The MSCI Emerging Markets Index returned 1.5% over the three-month period, compared with a 1.2% correction in the MSCI World Index, both in US dollars.2 Strong asset-class inflows, higher oil prices and a strong corporate earnings season drove returns in EM equities.

The Most Important Moves in Emerging Markets the Quarter

Asian stocks nudged higher in a volatile quarter, with Pakistan, Thailand and Malaysia posting the strongest returns. Pakistan introduced measures to shore up its economy, including a devaluation of the rupee to cope with a growing current account deficit. Thailand rose on the back of soaring exports that underpinned the government’s robust economic outlook for the year. Malaysia benefited from the ringgit’s advance to its highest level in nearly two years. Conversely, the Philippines, Indonesia and India were the weakest performers. The Philippines and Indonesia were hobbled by sharp declines in their currencies. India fell following the reintroduction of a long-term capital gains tax on equities.

Latin America was the top-performing region over the quarter, mainly due to strong performance in January. Brazil and Peru recorded double-digit gains over the quarter, while Mexico and Chile lagged. Brazil was supported by lessening political uncertainty and expectations of continued easing monetary policy following a 50-basis-point cut in the benchmark interest rate over the quarter to a new record low. This came despite disappointing fourth-quarter GDP growth. In Peru, investors hoped that the resignation of President Pedro Pablo Kuczynski amid a corruption scandal could allow the government to focus on the economy. In Mexico, however, lower manufacturing and consumer confidence data coupled with monetary policy tightening weighed on stock prices.

In Europe, Russia and the Czech Republic stood out, while equity prices in Poland, Greece and Turkey declined. Higher oil prices, stronger earnings growth prospects and undemanding valuations supported the Russian market. But in Poland, concerns that a strong zloty could hurt exports overshadowed strong economic growth data for the fourth quarter of 2017. Weakness in the Turkish lira was largely responsible for the decline in that market. Greece retreated despite moving closer toward exiting its bailout program and the approval of a package of fiscal, labor and energy reforms.

The South African market declined over the quarter, underperforming its EM peers, despite stronger-than-expected fourth-quarter GDP growth and an interest-rate cut in March. International ratings agency Moody’s also raised the country’s sovereign outlook from negative to stable. African National Congress (ANC) leader Cyril Ramaphosa was sworn in as South Africa’s new president following the resignation of Jacob Zuma. Egypt was among the top emerging-market performers, driven by an aggressive monetary easing policy and an upgraded GDP growth forecast for the current fiscal year.

Frontier markets outperformed their emerging-market counterparts during the quarter, with Kenya, Romania and Vietnam recording double-digit gains. Foreign and domestic investor interest continued to support the Vietnamese market, which reached a record high during the three-month period. In contrast, Argentina was among the weakest, impacted by profit-taking after strong performance in 2017, concerns surrounding wage negotiations and inflation, and effects of a longer-than-expected drought.

__________________
1.Source: International Monetary Fund World Economic Outlook January 2018 Update. There is no assurance that any estimate, forecast or projection will be realized.

2.Based on the MSCI Emerging Markets Index versus the MSCI World Index, US dollar terms. The MSCI Emerging Markets Index captures large- and mid-cap representation across 24 emerging-market countries. The MSCI World Index captures large- and mid-cap performance across 23 developed markets. Indexes are unmanaged and one cannot directly invest in them. Past performance is not an indicator or guarantee of future performance.