Franklin Templeton Emerging Markets Equity Chief Investment Officer Manraj Sekhon, and Director of Portfolio Management Chetan Sehgal, present an overview of emerging-market developments in April, including some events, milestones and data points. They say there was certainly no shortage of geopolitical news during the month, but note that solid businesses have the potential to do well in many different environments.

This post is also available in: French, German, Italian, Spanish

1. In April, North Korea’s Kim Jong-un crossed the border into South Korea, making him the first North Korean leader to do so in more than half a century, to meet South Korean President Moon Jae-in. The two leaders announced plans to formally end military conflict in 2018 and agreed to pursue complete denuclearization of the Korean peninsula. In our view, denuclearization would greatly reduce security risk and geopolitical uncertainty in the Asia-Pacific region as well as the world. It would also decrease the possibility of a nuclear weapons exchange, supporting global peace efforts. While it may be too early to draw any conclusions, we believe economic cooperation between the South and North could provide significant opportunities for South Korean companies, particularly construction and steel companies, which could benefit from infrastructure development. Longer term, almost all industries, including telecom, banking, food, automobile and retailers, could benefit.

2. China recently announced plans to lift foreign ownership restrictions in the automobile sector over the next five years. Select Chinese automobile manufacturers that have joint ventures with overseas partners saw their share prices correct. We, however, maintain a positive view on the sector and believe that the selloff provides investors with an attractive entry point. We expect personal car demand in China to remain resilient, supported by the continued rise of China’s upper middle class, offering a solid opportunity to tap into the trend of premium consumption. Furthermore, vehicle penetration rates in China remain quite low in comparison with developed markets.

3. Environmental, social and governance (ESG) analysis is especially crucial in emerging markets, where regulations related to these factors continue to evolve, and where companies with robust ESG standards are likely to be better positioned for the future. We believe ESG analysis contributes to a more holistic assessment of investment risks and returns, as companies’ ESG standards can influence their financial prospects. For example, corporate governance is an important driver of shareholder value, so factors we consider in evaluating companies include the quality of the management, ownership structures and history of business conduct. We proactively engage with company management and other stakeholders to monitor corporate governance practices and promote positive change when needed. 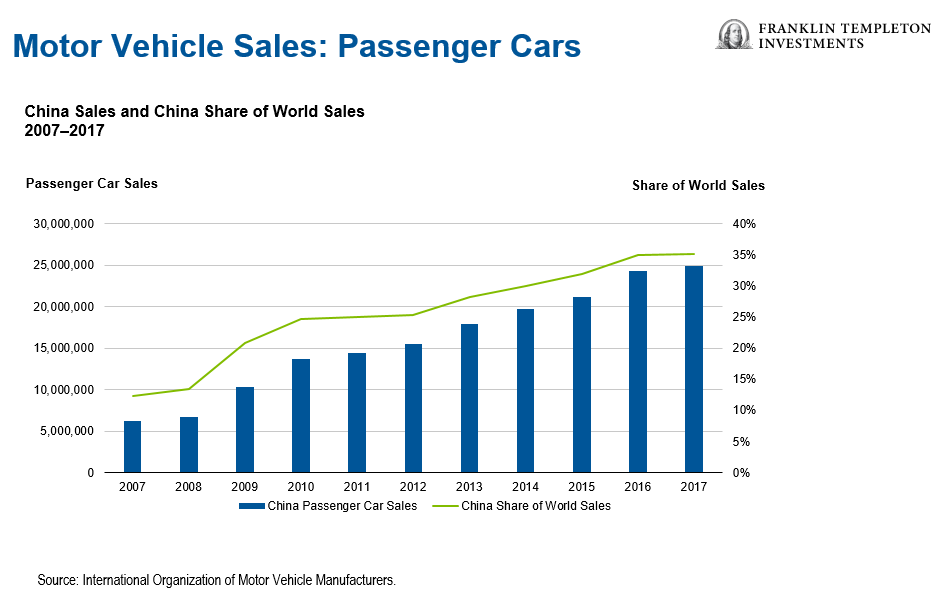 Investors have had plenty of geopolitical news to digest, notably the US–China trade dispute, the historic meeting between the leaders of North and South Korea, the summit between Chinese President Xi Jinping and Indian Prime Minister Narendra Modi as well as upcoming presidential elections in Brazil and Mexico. But geopolitical challenges are par for the course when it comes to investing globally and particularly in emerging markets. Our belief is skilled investors need to look past immediate uncertainty to find compelling long-term opportunities, while at the same time discerning the likely investment implications from ongoing political flux.

For instance, while tit-for-tat protectionist measures between the United States and China bear watching, we do not expect a full-blown trade war. In our view, the importance of bilateral trade for both sides should ensure stable relations overall. The dispute may even speed up China’s efforts to open up its economy—as we have seen with recent financial reforms—and upgrade its manufacturing and services sectors. Such developments could create interesting multi-year investment opportunities.

Geopolitical risks require close monitoring, but they make up one factor of many that fundamental investors like us consider. We seek companies with sustainable earnings power over the long term, and experience tells us that solid businesses have the potential to do well in different environments. To find such companies, we evaluate a variety of factors such as the strength of the business model, cash flows, balance sheets, management, ESG standards and more. Through a comprehensive assessment of investment risks and returns, we aim to build well-diversified portfolios that avoid excessive risks.

As a group, emerging equity markets declined marginally during April, lagging their developed-market counterparts, as a result of divergent trends. On the one hand, US–China trade tensions and additional US sanctions on Russia weighed on sentiment, while on the other, the historic summit between North and South Korea gave investors hope. The price of oil and other commodities reached multi-year highs, while emerging-market (EM) currencies weakened against a strengthening US dollar. The MSCI Emerging Markets Index declined 0.4% over the month, compared with a 1.2% return in the MSCI World Index, both in US dollars.1

The Most Important Moves in Emerging Markets in April

Asian markets edged higher in April, led by India and South Korea. India benefited from strength in consumer staples stocks as forecasts of a regular monsoon season lifted the outlook for rural demand. South Korea rose following a historic summit between leaders of South and North Korea, who pledged to negotiate a peace treaty and denuclearize the Korean peninsula. In contrast, Pakistan, Taiwan and Indonesia fell the most. Pakistan gave up initial gains fueled by the government’s announcement of a tax amnesty scheme to boost repatriation of overseas assets. Taiwan was hampered by weakness in Apple suppliers amid concerns about subdued demand for the iPhone X. Indonesia came under pressure as the rupiah hit a fresh two-year low against the US dollar.

Brazilian equities declined over the month, as soft macroeconomic data released in April raised concerns of a slower-than-expected domestic economic recovery. The International Monetary Fund, however, raised its 2018 gross domestic product (GDP) growth forecast from 1.9% to 2.3%.2 Markets in Mexico and Chile also ended the month with declines. At the other end of the spectrum, Colombia was the region’s top performer, driven by higher oil prices and growing expectations for market-friendly candidate Ivan Duque to win the presidency in late May.

Russia and Turkey were among the weakest EM performers in April, with declines exacerbated by a strong US dollar. Additional US sanctions weighed on Russian equities, eliminating most of the first quarter’s solid returns, despite a rally in oil prices. In Turkey, President Recep Tayyip Erdogan called for early elections, while the central bank raised one of its key interest rates by a larger-than-expected 75 basis points (bps) to support price stability in view of elevated inflation levels. In contrast, the Greek market ended the month with double-digit gains after a weak March, as the country moved closer toward exiting its bailout program.

The South African market declined largely due to weakness in the rand. President Ramaphosa plans to implement incentives to attract US$100 billion in new investment over the next five years to stimulate the domestic economy. The president also pledged to combat corruption and address political and regulatory uncertainty. Egypt ended the month with positive returns, as investors saw President Abdul Fattah al-Sisi’s re-election as a sign of stability and hoped that he would continue to drive through key reforms.

Frontier markets lagged their EM counterparts during the month, with Vietnam, Kenya and Argentina among the weakest performers. Vietnam and Kenya experienced profit-taking following strong gains over the last quarter. In addition, the Vietnamese government’s plans to accelerate privatization of state-owned enterprises led investors to reserve cash in view of upcoming initial public offering (IPO) opportunities. In Argentina, a surprise 300 basis point (3%)  interest-rate hike aimed at curtailing the devaluation in the peso and concerns about inflation weighed on the market there. Nigeria and Bangladesh, however, ended April with positive returns.

1. The MSCI Emerging Markets Index captures large- and mid-cap representation across 24 emerging-market countries. The MSCI World Index captures large- and mid-cap performance across 23 developed markets. Indexes are unmanaged and one cannot directly invest in them. Past performance is not an indicator or guarantee of future performance. MSCI makes no warranties and shall have no liability with respect to any MSCI data reproduced herein. No further redistribution or use is permitted. This report is not prepared or endorsed by MSCI. Important data provider notices and terms available at www.franklintempletondatasources.com.

2. Source: International Monetary Fund. There is no assurance that any estimate, forecast or projection will be realized.

Data from third party sources may have been used in the preparation of this material and Franklin Templeton Invest¬ments (“FTI”) has not independently verified, validated or audited such data. FTI accepts no liability whatsoever for any loss arising from use of this information and reliance upon the comments opinions and analyses in the material is at the sole discretion of the user. Products, services and information may not be available in all jurisdictions and are offered outside the U.S. by other FTI affiliates and/or their distributors as local laws and regulation permits. Please consult your own financial professional or Franklin Templeton institutional contact for further information on availability of products and services in your jurisdiction.