Emerging markets have struggled in the first half of this year amid a storm of uncertainties. Franklin Templeton Emerging Markets Equity’s Chetan Sehgal examines issues that have acted as clouds on the asset class—including a stronger US dollar and trade skirmishes—and highlights some positive longer-term fundamentals. He thinks some of the concerns are overblown.

After a strong couple of years, emerging markets overall have struggled in the first half of 2018. Investors have focused on negative factors, particularly rising US interest rates, US dollar strength and trade concerns. However, we think some of these fears are overblown.

We recognize that a backdrop of rising US interest rates and a strengthening US dollar—while reflective of a strong US economy—can impact emerging markets. While a strong US economy is good news for the global economy (including emerging markets), higher interest rates can make it costly for borrowers to service their external debt. So, local currencies can—and have—come into pressure as servicing dollar-denominated debt becomes more difficult. Capital flows have reversed out of what’s perceived to be “riskier” markets. We have seen a flight of capital out of emerging-market equities this year, and some currencies have weakened to the point where they appear to be quite undervalued right now relative to the US dollar. We don’t think markets are reflecting the positive fundamentals we see.

Certain countries with strained finances continue to attract the bulk of headlines, but it is worth noting their relatively small size in the context of the broader emerging-market asset class, as well as the extent to which their fundamentals are weaker. For example, Turkey represents only 2% of MSCI Emerging Markets Index, Pakistan 0.5%, and Argentina is not even in the index yet.1 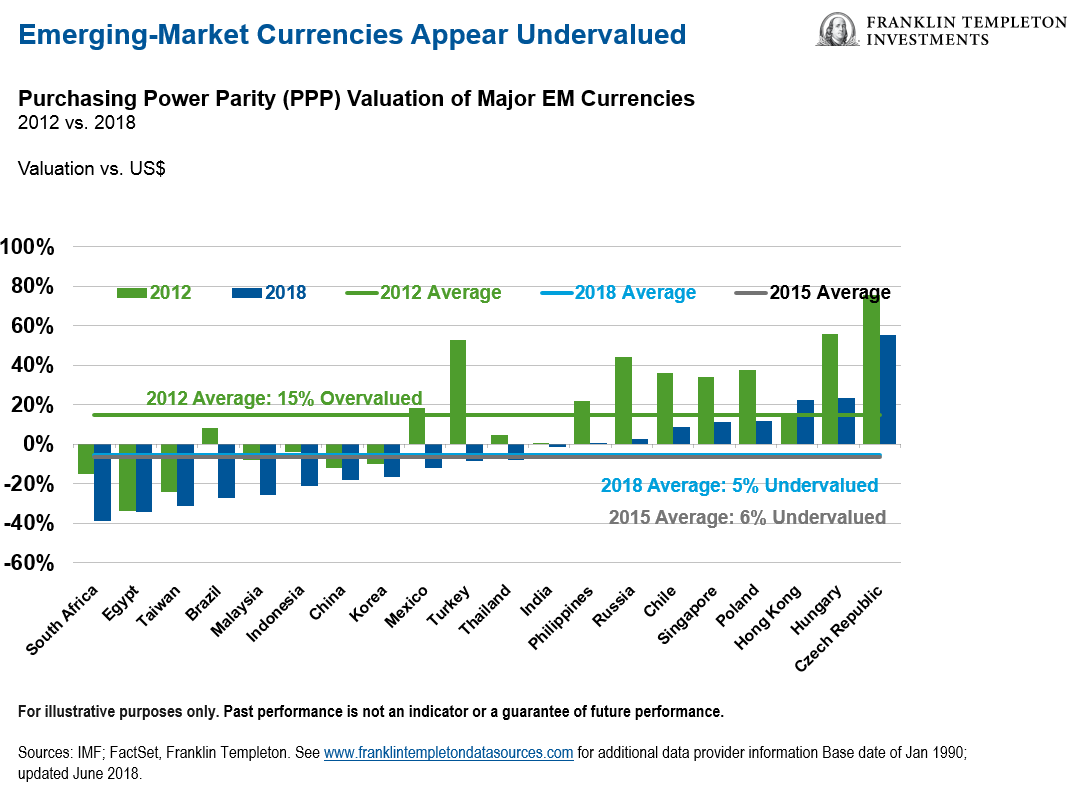 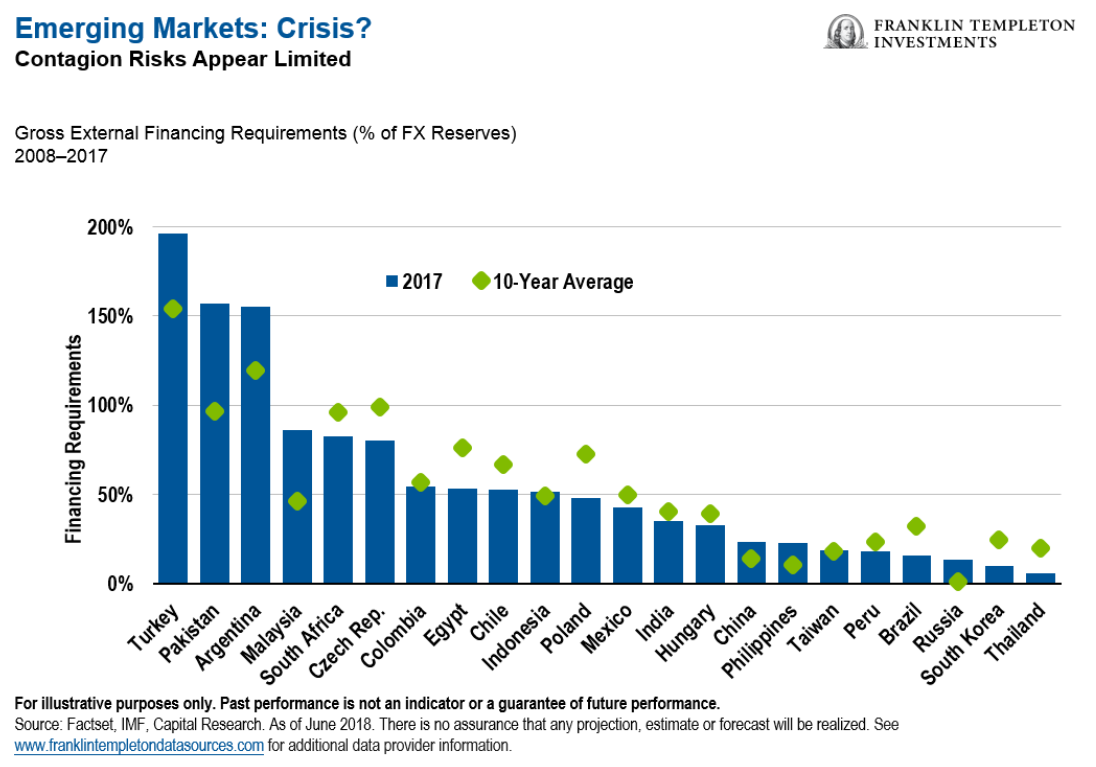 Markets are forward-looking, and we have found that when it comes to emerging markets, they tend to overshoot to the downside. We saw this occur in 2013, when the US Federal Reserve (Fed) announced it would be “tapering” its quantitative easing program and then in 2015 when it began to tighten. Sentiment toward emerging markets was negative. While it’s true that some economies were vulnerable, in some cases, the markets were pricing in crises-type levels. The currencies became undervalued, and when a crisis didn’t occur, we saw a rebound.  Short-term risk aversion and a slight upward move in interest-rate expectations have contributed to recent dollar strength, but it remains to be seen if this is sustained.

In addition to interest rates and the dollar, this year we’ve seen concerns about the impact of US tariffs spook investors. While the focus has been on US tariffs, the reality is that trade between regional emerging-market partners has been rising and increasingly driving growth.

China has been the target of a host of US tariffs but has become a large counterweight to the United States in terms of volume and value of trade across Asia and across emerging markets as a whole. China is the largest export market for a host of countries and has been looking to strengthen trade relationships outside the United States. In reaction to US tariffs, China has reduced or eliminated a number or tariffs on imported goods from several countries in the region, including South Korea, India, Bangladesh, Laos and South Korea, which could help those countries endure the current US trade skirmish.

In the United States, recent tax cuts have helped drive growth in the economy and asset prices—but have also contributed to inflation fears and rising interest rates. It’s important to note that the US tax cuts are deficit-funded, which should place downward pressure on the US dollar over the longer term.

We see plenty of reasons to be optimistic about emerging markets overall.

So, while the markets may be pricing in fear and uncertainty, many emerging economies appear to us to be in much better shape than they were during other corrective periods. 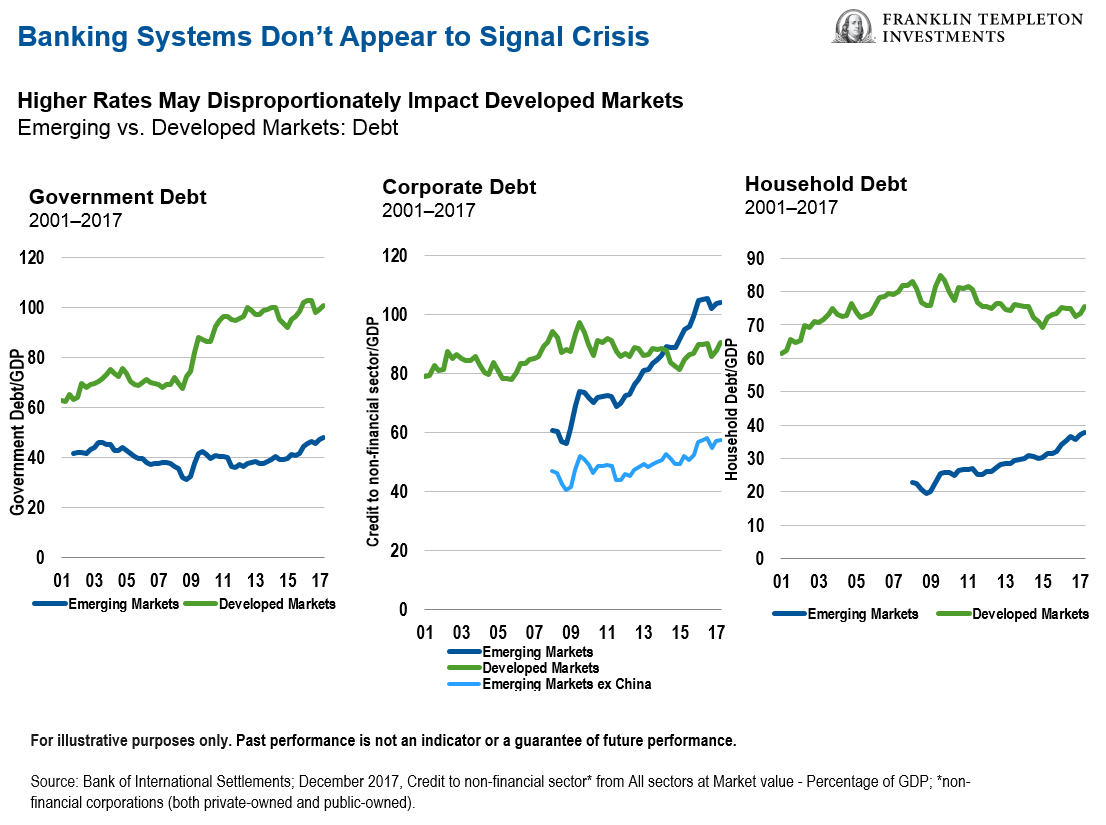 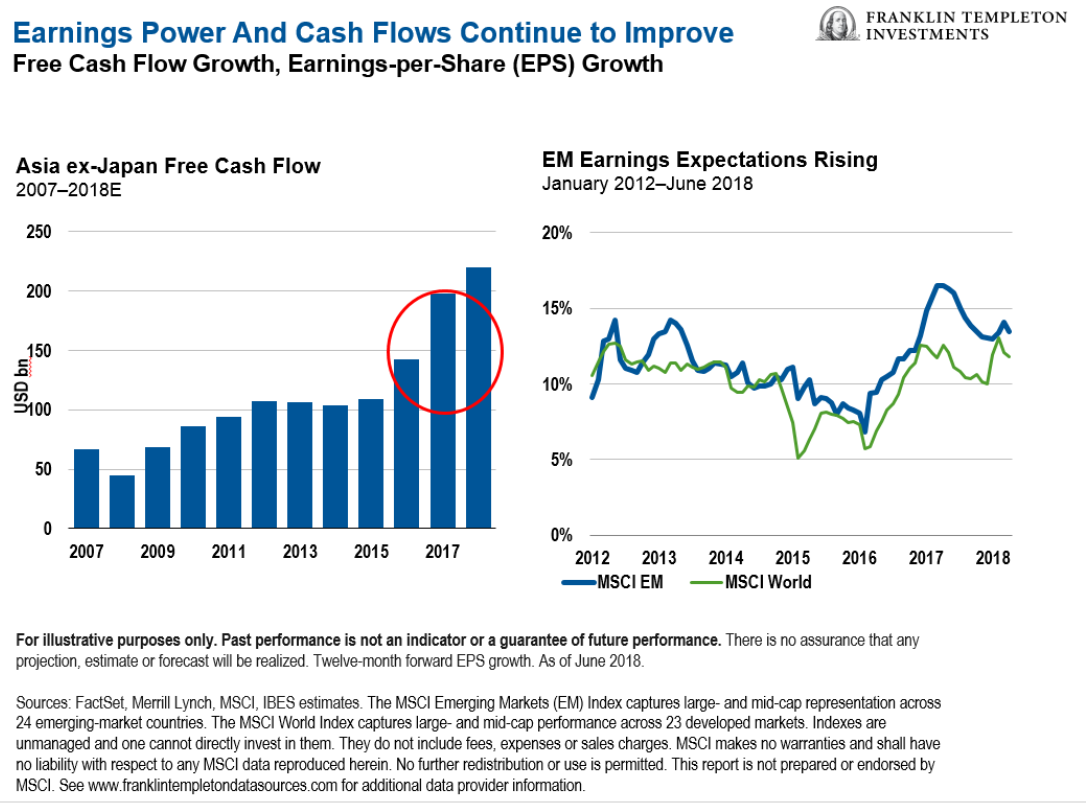 Whether you label it a trade war or not, we have seen a very asymmetric market reaction to the US tariffs and counter-tariffs announced this year involving China and other countries. Generally, in the post-WWII era, the market consensus has been that free trade is good for all parties (at a macro level); both sides benefit. So, conversely, a trade war would mean both sides lose.

However, the way the market has been reacting suggests a trade war between the United States and China would be negative for China but has virtually no impact on the United States. At least, that’s the conclusion one might draw from looking at the divergence in terms of equity market performance and the currency values of the two countries.

It’s important to recognize that while the offshoring of production and supply chains by technology giants contributes to the trade deficit, that cheaper offshore production is a primary driver of their high margins, boosting aggregate US corporate earnings. There are benefits as well as costs.

When we look at the valuations of Chinese companies and examine the underlying strength in the Chinese economy, we see the recent pullback as an opportunity to pick up bargains. While we recognize there are issues, the government’s reform efforts there continue. Leaders have announced measures to stimulate growth, including tax cuts and infrastructure spending. We think markets are pricing an excessively negative outcome both specific to China but also more generally towards emerging markets when it comes to trade frictions.

We expect the second half of 2018 to likely be stronger for a number of reasons. We think the passing of the summer risk-off period could bring improved investor sentiment. Other seasonal factors include potential increased consumer spending for events heading into year-end such as China’s Singles Day and US Black Friday, and holidays globally such as Thanksgiving, Diwali and Christmas. Additionally, China’s car sales typically peak towards December as factories shutter to reduce winter pollution.

While this whole discussion has been on macro factors, our approach as investors is more bottom-up than top-down. That is, whether it’s China or anywhere else, we look for quality companies that we think can navigate any economic environment.

1. Source: The MSCI Emerging Markets Index captures large- and mid-cap representation across 24 emerging-market countries. Indexes are unmanaged and one cannot directly invest in them. Past performance is not an indicator or guarantee of future performance. MSCI makes no warranties and shall have no liability with respect to any MSCI data reproduced herein. No further redistribution or use is permitted. This report is not prepared or endorsed by MSCI. Important data provider notices and terms available at www.franklintempletondatasources.com.