A confluence of factors has caused investor sentiment to sour on emerging markets recently, including global trade tensions, a rising US dollar and idiosyncratic issues in Turkey and Argentina.

While some of the headlines may seem disconcerting, they don’t tell the whole story, according to our investment professionals who are on the ground in many of these regions.

Franklin Templeton Emerging Markets Equity believes it’s important to point out emerging markets are not homogeneous, and the countries dominating the dire headlines represent a very small part of the emerging-market universe. The team points to four reasons that support their more positive view of the asset class as a whole.

Emerging Markets Have Been Able to Navigate Rising US Interest Rates

The rising US dollar has been a central factor in emerging-market pain in recent months, and rising interest rates and the short-term impact of US tax reforms have helped fuel this dollar strength.

However, should investors really worry that rising rates will derail emerging markets? Maybe not. The US Federal Reserve’s (Fed’s) past four tightening cycles did not lead to long-term downward spirals in emerging-market equities, as the chart below illustrates.

In addition, the chart below shows that the previous Fed tightening cycle from June 2003 to June 2007 had a limited impact on emerging-market currencies. 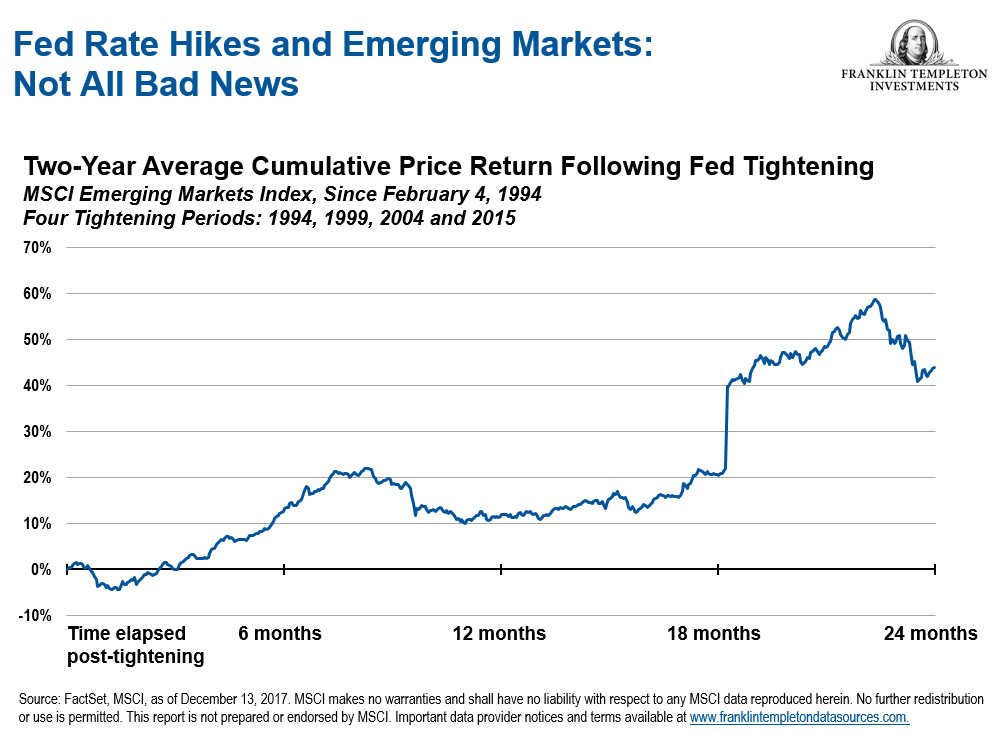 While there’s been a lot of attention on strong US economic growth recently, the fact remains that emerging markets have for many years been the world’s growth engine.

“We’re not only witnessing a shift in the geographic epicenter of GDP growth to the East, but even within emerging markets there has been a transformation in the drivers of growth. For instance, several years ago China overtook the United States and Japan in terms of total patents filed, and this is but one of many indicators of the shift towards innovation, technology and more broadly the ‘new economy’ that is taking place.” – Manraj Sekhon, September 19, 2018.

The table below illustrates how GDP growth for emerging markets overall has outpaced that of developed markets overall—a trend which the International Monetary Fund (IMF) sees continuing this year and next.1 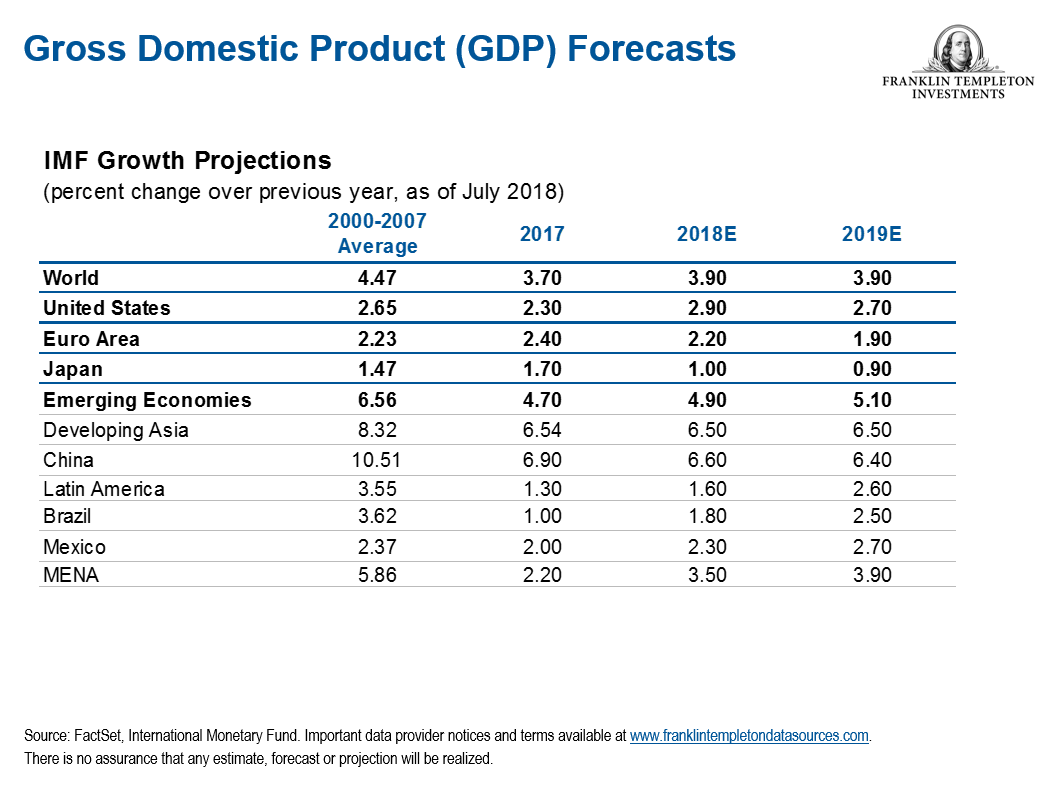 While much of the trade-tariff attention over the summer has focused on the US-China relationship, there has been less focus on China’s approach to trade with other partners. Intra-emerging-market trade has thrived and overtaken exports to developed economies, according to Sekhon.

“In the last decade, China has shot past the United States to become a far more important export market for most large emerging economies—not least due to its burgeoning consumer market—and accordingly, trade growth now predominantly comes from intra-emerging-market demand. Rising protectionism in the West may further pivot focus towards regional agreements; indeed, China appears eager to replace US leadership in Asia in this area.” – Manraj Sekhon, September 19, 2018.

The chart below shows the growth in intra-Asian trade and an overall shift away from dependence on developed markets as an export destination. 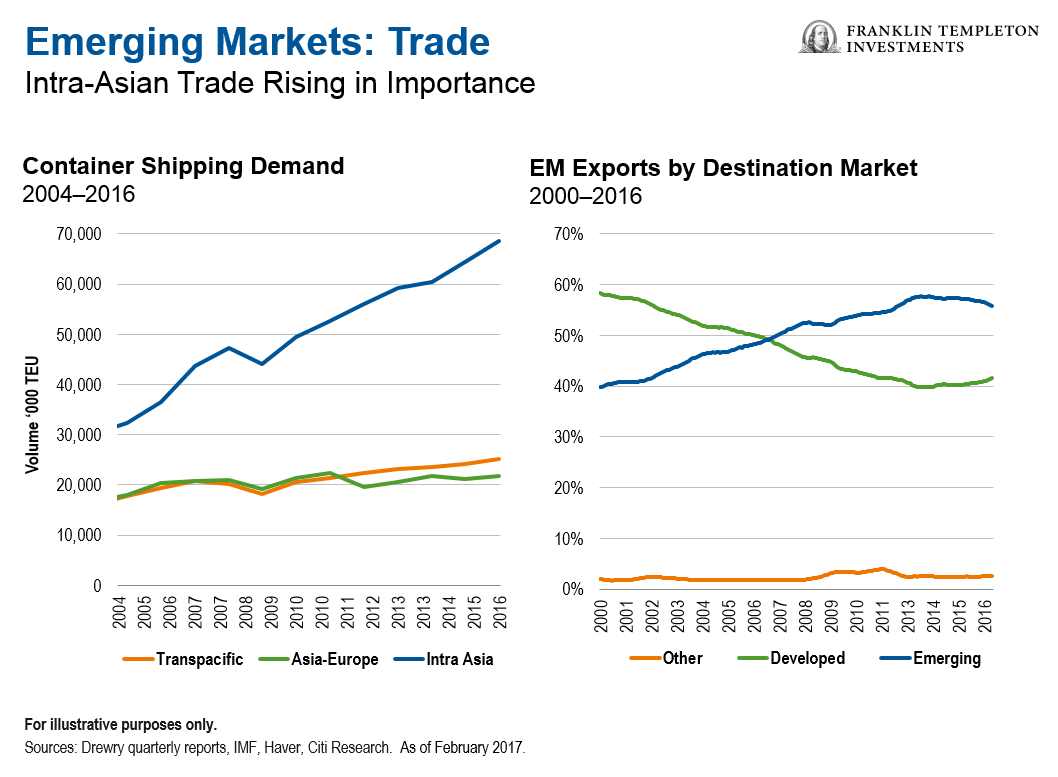 Since the Asian Financial Crisis in the 1990s, government funding through external debt has been on the decline. While it has moved up a bit in recent years, the charts below show developed markets actually have much higher government debt burdens. And, emerging-market households have stronger savings rates than developed markets, too. 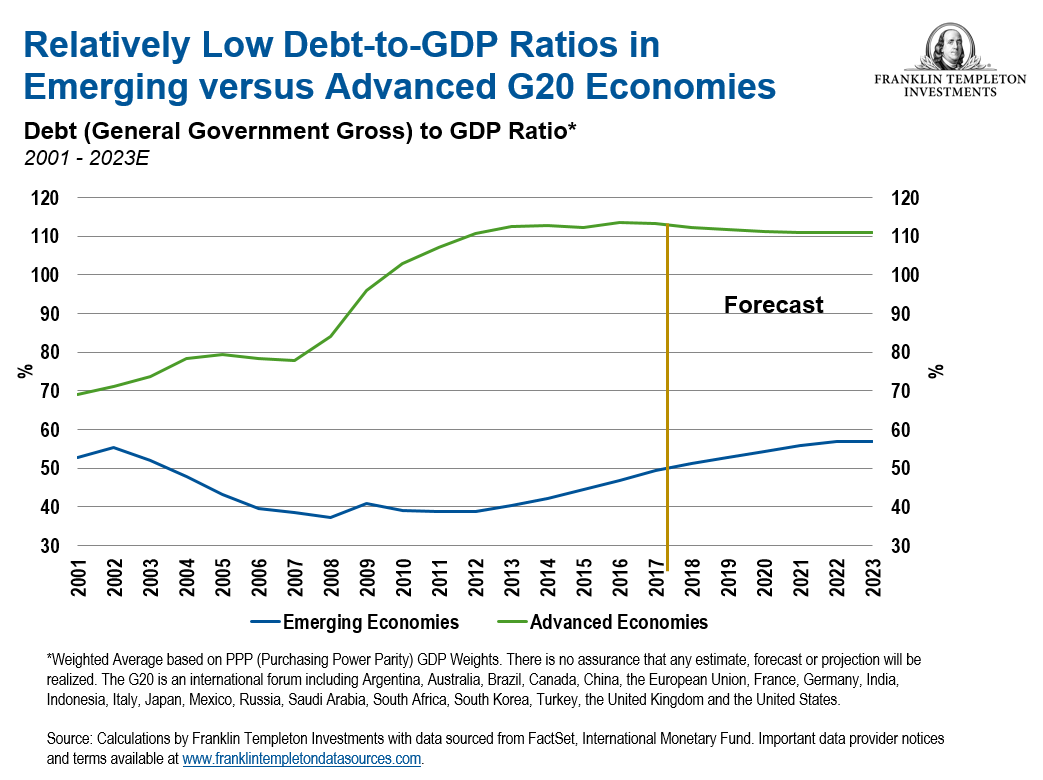 In addition, the team believes global advancements in e-commerce, mobile banking, biotechnology, robotics and autonomous vehicles have opened a universe of opportunity that is not confined to the United Kingdom, the United States and other developed markets.

All investments involve risks, including the possible loss of principal. Bond prices generally move in the opposite direction of interest rates. Thus, as the prices of bonds in an investment portfolio adjust to a rise in interest rates, the value of the portfolio may decline. Investments in foreign securities involve special risks including currency fluctuations, economic instability and political developments. Investments in emerging markets, of which frontier markets are a subset, involve heightened risks related to the same factors, in addition to those associated with these markets’ smaller size, lesser liquidity and lack of established legal, political, business and social frameworks to support securities markets. Because these frameworks are typically even less developed in frontier markets, as well as various factors including the increased potential for extreme price volatility, illiquidity, trade barriers and exchange controls, the risks associated with emerging markets are magnified in frontier markets. Stock prices fluctuate, sometimes rapidly and dramatically, due to factors affecting individual companies, particular industries or sectors, or general market conditions.