Emerging markets continued to struggle in October amid an environment of heightened equity-market volatility globally. Manraj Sekhon, CIO of Franklin Templeton Emerging Markets Equity, and Chetan Sehgal, senior managing director and director of portfolio management, believe the pullback presents long-term investors with opportunities amid what they dub an overreaction. They present the team’s overview of the emerging-markets universe in October.

We are of the opinion that the market has been discounting a far more pessimistic scenario than we currently envisage for emerging markets. EM fundamentals remain strong and we believe that the recent selloff provides attractive investment opportunities for long-term investors.

We do not expect contagion from markets such as Turkey and Argentina to spread across the entire EM asset class. The fact is that this is a very different world from past crises: most emerging countries have floating exchange rates, current account surpluses and more favorable debt levels than their developed market peers. Moreover, Turkey accounts for less than 1% of the MSCI Emerging Markets Index, while Argentina is not in the index, and its weighting is expected to be even smaller than Turkey’s when it is included in 2019.

In terms of US-China trade concerns, China’s dependency on trade has been declining, and trade with the United States represents a modest percentage of the Chinese economy. Moreover, intra-EM trade has become more important in recent years, and rising tariffs between the United States and China may further pivot focus toward greater regional agreements. For example, tensions between China and Japan have started to ease, resulting in Japanese Prime Minister Shinzo Abe visiting China in October to discuss increased co-operation, the first such trip by a Japanese prime minister since 2011. The long-term structural case for EMs continues to center around demographics, consumption and technological advances. We believe that the best investment results are achieved by buying companies which have sustainable earning power and trade at a discount to their intrinsic worth.

A combination of headwinds sent global stocks lower in October, with EM equities ceding more ground than their developed-market (DM) counterparts. Concerns about global economic growth, prospects for major technology companies, US interest rate hikes, and US-China trade tensions curbed investor sentiment. The MSCI Emerging Markets Index fell 8.7% over the month, compared with a 7.3% decline in the MSCI World Index, both in US dollars.1 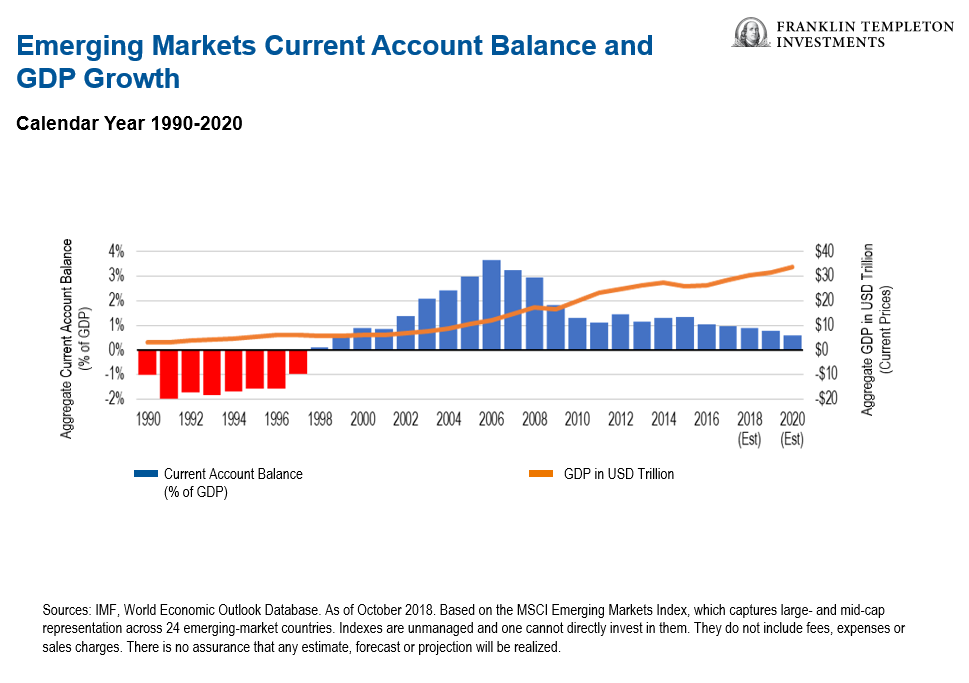 The Most Important Moves in Emerging Markets in October

Asian stocks registered broad-based losses. South Korea and Taiwan led the way down, as their technology-heavy indexes fell amid a rout in global technology stocks. China’s stock market was also among the weakest performers in the region, hampered by slowing domestic economic growth and fears of an escalation in the US-China trade dispute. Measures from the Chinese authorities to support the economy helped stem the market’s decline. However, the Philippines and Indonesia fared relatively better, albeit also ending October in negative territory.

Latin America was the only EM region to end the month with a positive return, solely because of the strong performance of the Brazilian market. Equity prices rallied on expectations for, and the subsequent victory of, a more market-friendly candidate in presidential elections late in the month as well as appreciation in the Brazilian real. At the other end of the spectrum, Mexico and Colombia recorded double-digit declines. The cancelation of the new Mexico City Airport project and expectations that persistent inflation could result in higher interest rates impacted investor sentiment in Mexico. A decline in oil prices and depreciation in the Colombian peso weighed on the Colombian market.

Emerging European markets corrected in October, but performed better than their EM peers. Poland, Greece and the Czech Republic fell the most. Eurozone worries weighed on the region in October following fiscal concerns and a credit downgrade in Italy, as well as German Chancellor Angela Merkel’s decision not to run for a fifth term. The Russian market also corrected on the back of lower oil prices. A strong appreciation in the Turkish lira partially offset losses in US-dollar terms in that market. In South Africa, stocks in the consumer discretionary, materials and financials sectors declined the most.

Although frontier markets as a group declined, they outperformed their EM and DM counterparts. Kazakhstan, Lebanon and Sri Lanka were among the top-performing markets, ending the month with positive returns. The Moscow Exchange (MOEX) and Kazakhstan Stock Exchange (KASE) signed a strategic partnership agreement in October, which also included plans for the MOEX to acquire a 20% stake in the KASE. Hopes that a political upheaval in Sri Lanka could result in a more-growth focused government boosted sentiment in that market. Lithuania and Vietnam, however, underperformed.

1. Source: MSCI. The MSCI Emerging Markets Index captures large- and mid-cap representation across 24 emerging-market countries. The MSCI World Index The MSCI World Index captures large- and mid-cap performance across 23 developed markets. Indexes are unmanaged and one cannot directly invest in them. MSCI makes no warranties and shall have no liability with respect to any MSCI data reproduced herein. No further redistribution or use is permitted. This report is not prepared or endorsed by MSCI. Important data provider notices and terms available at www.franklintempletondatasources.com. Past performance is not an indicator or guarantee of future performance.