Continued US dollar strength has focused attention on weaker commodity prices and dented investor enthusiasm for emerging markets in recent months—stoking fears that the current climate could lead to a repeat of the 1997-1998 Asian Financial Crisis. However, Chetan Sehgal, Franklin Templeton Emerging Markets Equity, feels these concerns are largely overdone. He believes the last two decades of mass financial reforms have transformed emerging Asia’s financial markets.

In part two of this series, “The Impact of US Policy on Emerging Markets,” Chetan outlines the progress he’s seen in emerging Asia’s financial markets. He also explains why he thinks the US dollar’s influence doesn’t necessarily have to dim the prospects for emerging markets.

Since the 1997-1998 Asian Financial Crisis (AFC), investor sentiment on emerging markets has tended to sour during periods of US dollar strength and lower commodity prices.

Back in 1997, a rush of foreign investment and series of asset bubbles precipitated the crisis at the same time the US Federal Reserve began to raise interest rates, causing the US dollar to strengthen. Servicing costs for dollar-denominated debt also became increasingly difficult to meet. Meanwhile, Thailand’s step to remove its currency peg to the US dollar left Asian economies vulnerable and subject to speculative currency attacks.

But 20 years on from the AFC, we regard the economic landscape in many emerging markets as fundamentally stronger than it was back then. Our experience suggests investors should focus less on what’s going on in the United States, and more on the developments on the ground in the countries themselves.

In many cases, emerging markets have drawn lessons from past crises to strengthen policies and governance. In addition, many emerging-market economies are less commodity-driven then they were decades ago. Therefore the whims of commodity prices have less influence. Interestingly, two of the most high-profile emerging markets, India and China, are both importers of oil and commodities. These two countries stand to benefit from cheaper commodity prices as a result of a stronger US dollar.

Thailand and many other countries currently have floating currencies and more disciplined policies for managing foreign-exchange reserves and current accounts. Improved banking regulations have encouraged domestic sources of funding in many instances, so there is less reliance on dollar-denominated debt, which can be costly to service as US interest rates rise.

Changes in US policy could of course still cause pain in emerging-market countries with high external debt. But we’ve noticed a general shift. Asian monetary policy is no longer as highly correlated with US interest rates and is more dependent on local growth and inflation conditions.

Despite some impact from a rising US dollar, we’ve seen some dramatic changes made to financial markets in emerging Asia since the AFC. This suggests to us that the fundamentals we see today are more resilient and should avoid a repeat of the 1997 crisis.

We believe positive change is underway—economic growth, financial reform and the development of local capital markets has spurred on change in countries the AFC affected most. For example, Thailand, Malaysia and China now have current account surpluses.

It was a different story back in 1997. The collapse of the Thai baht proved to be the catalyst of the AFC. Today, Thailand’s fundamental picture is much improved. The country has a large current account surplus that’s running in excess of $40 billion,1 driven partly by tourism and auto exports, plus a growing textile industry.

Indonesia was another country whose currency came under pressure from the rising US dollar during the AFC. Its central bank, Bank Indonesia, has since made significant efforts to implement new regulations. These include higher import taxes for non-essential consumer goods in a bid to reduce its current account deficit, which currently sits at 3% of gross domestic product.2

The central bank also now has the power and the drive to defend the Indonesian rupiah if required through interest-rate hikes and with its cache of billions of dollars in foreign exchange reserves.

In general, emerging-market economies are actually less leveraged than advanced economies. We think this gap could provide some breathing room as not all debt held by emerging markets is dollar-denominated debt. The cost of servicing this local currency debt would likely be less. 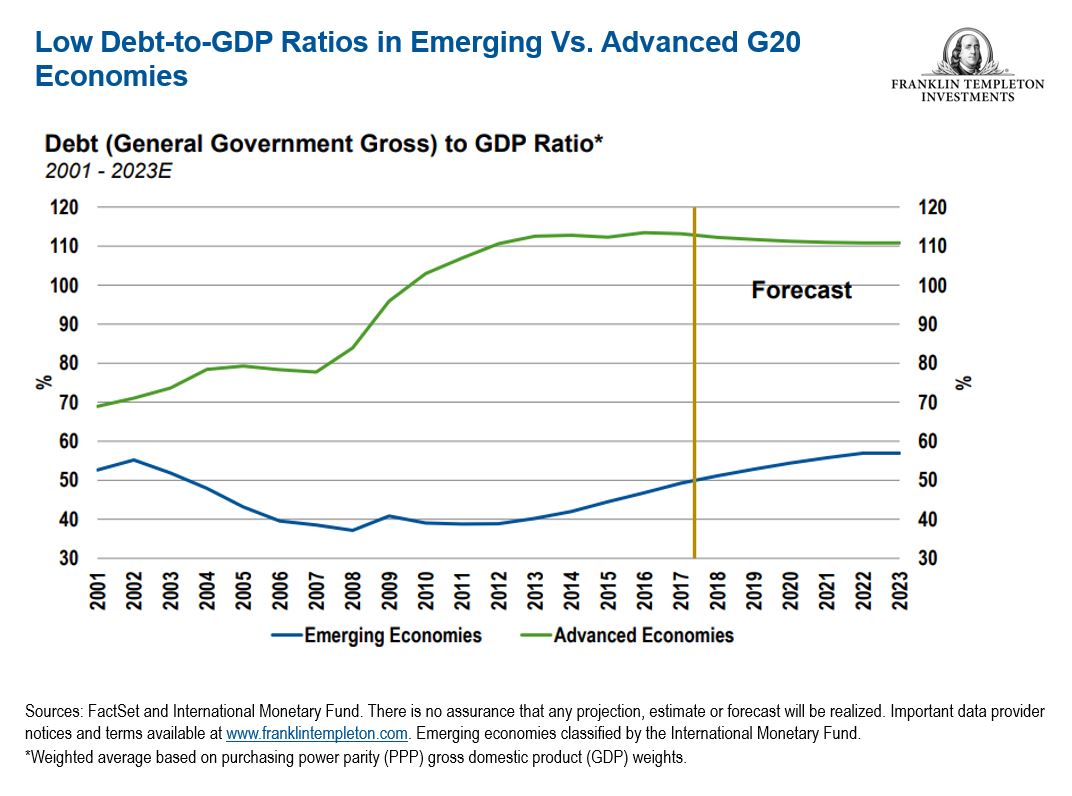 Recent dovish commentary from the US Federal Reserve means market expectations for US interest rate hikes next year have fallen. If the Fed slows its interest-rate hiking cycle, we could also see some stability or even some weakening in the US dollar.

Financial markets and core fundamentals in emerging Asia are likely less to be influenced by US policy than they were 20 years ago. In our view, this leaves emerging markets more resilient to dollar strength than before.