As India gears up for a general election in the spring, an increase in populist rhetoric among the country’s political parties may spook some investors. Sukumar Rajah, senior managing director and director of portfolio management, Franklin Templeton Emerging Markets Equity, is more relaxed. He believes this jockeying for position is part and parcel of Indian politics and feels that the country’s solid fundamentals continue to present a positive story for investors.

In the lead up to Indian general elections, we’ve come to expect an increase in populist rhetoric from the political parties vying for power.

This year is no exception. The general election is due to take place in April and May 2019, and we’ve already seen a number of manifesto promises designed to appeal to India’s large rural community, including: farm loan waivers, subsidies, and a reduction in the Goods and Services Tax (GST) and unemployment allowances.

A number of these measures could have significant fiscal implications for India’s economy and have raised eyebrows among many investors.

Some 800 million voters are expected to place a vote using one of India’s 1.6 million voting machines, that can only take a maximum of 2,000 votes each.

For areas without electricity, these machines can also run on batteries.

However, we take a more pragmatic view. We believe India’s growth path, underpinned by policies put in place since 2014 by Prime Minister Narendra Modi, is well-enough established to withstand any short-term challenges.

These policies, including the introduction of the GST, a revamped bankruptcy code, bank recapitalization and increasing foreign direct investment limits across sectors, as well as the Make in India initiative, have helped India become the fastest-growing major emerging-market economy in 2018, at 7.3% GDP growth.1

Partly in response to Modi’s “Make in India” initiative and India’s growing middle-class population, we’ve seen an increase in demand for locally manufactured products. Consequently, a number of original equipment manufacturers (OEMs) have opened factories closer to where their goods are sold and used.

That trend has extended to include the manufacture of components used in other products. For example, one of the world’s largest air conditioning (AC) compressor companies has announced plans to move manufacturing to India in 2021 to cater to rising demand for AC units from the country’s expanding middle class.

In a few years, we think most personal AC units sold in India will include domestically manufactured compressors.

Whatever the outcome of the election, we believe, there is little scope for any new government to implement radical, populist policies, due to the set up between the government and its dependency on the Reserve Bank of India to balance its budget deficit. So, in our view, it’s unlikely we’ll see any major changes made to legislation whoever forms the new government.

If Modi is re-elected, we don’t expect many material changes to India’s economic path.

Even if Modi doesn’t win outright, we think it’s likely his Bharatiya Janata Party (BJP) will still play some role in forming the new government, possibly as part of a coalition.

Reasons to Be Optimistic

We think we’re at a turning point for earnings growth. The last few years for earnings growth have been challenging, due to the effects of demonetization, implementation of GST and the impact of negative headlines from non-performing loans. We think it’s likely we’ll see a gradual improvement in earnings growth, which would be supportive for equities.

In the longer run, we believe the case for investing in India remains strong as fundamentals appear solid and long-term growth drivers give us reason to look at India in a positive light. Projected gross domestic product growth for 2019 remains relatively robust at 7.5%, and is estimated at 7.7% in 2020.2 By comparison, China’s economy is forecast to grow at a slower rate of 6.2% this year and in 2020.3 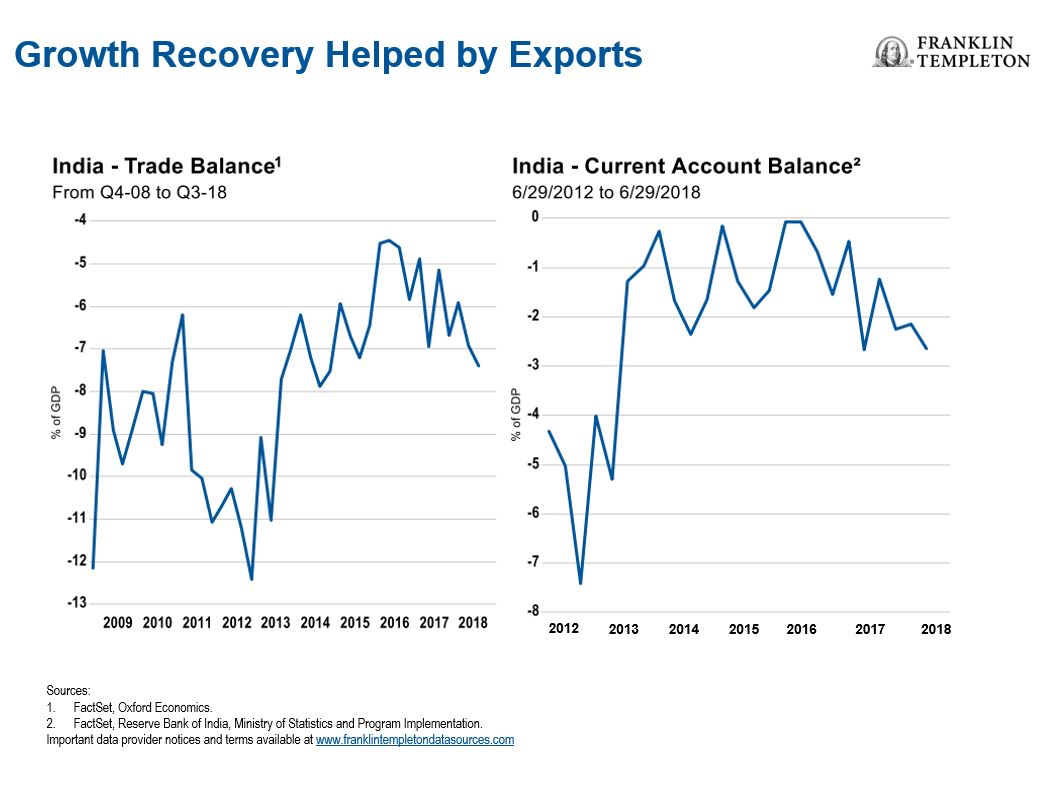 A prudent combination of less tax and increase in government spending, along with an increase in private sector capital expenditure (capex), should likely further sustain growth.

In summary, despite some risk-off sentiment we’ve seen towards Indian equities in the lead up to the election, we believe there’s still a case for investing in India. Even if there was a surprise election result, we believe the impact from uncertainty would be felt in the short term, because fundamentals remain intact.

4. Source: World Economic Outlook, International Monetary Fund, January 2019. There is no assurance that any estimate, forecast or projection will be realized.