Accelerated demand for regional debt suggests a constructive remainder of 2019 for bonds in the Gulf Cooperation Council (GCC), according to Dino Kronfol, chief investment officer, Franklin Templeton Global Sukuk and MENA Fixed Income. He outlines four things that are at the top of his mind for GCC debt in the current economic climate. He also shares why he thinks the MENA region could provide fertile ground for fixed income investors searching for yield.

When it comes to fixed income investing, we think bond markets in the Gulf Cooperation Council (GCC) region deserve much more investor attention than they’re receiving.

We’ve seen the Gulf Cooperation Council (GCC)1 economies take some bold steps to implement both fiscal reforms and diversify economies away from their dependency on oil.

At the same time, the GCC’s phased inclusion in the J.P. Morgan Emerging Market Bond Index (EMBI)2 over the course of 2019 signals to us that the inclusion should lead to a significant increase in investor interest and demand for GCC bonds.

Overall, the evidence suggests GCC debt issuance, which includes traditional bonds and sukuk (Shariah-compliant bonds), is on the rise.

These are exciting developments in what we think was an underappreciated asset class and we remain constructive on GCC debt. Here are four considerations we think could drive GCC debt for the remainder of the year.

One of the most important themes we’re seeing in the MENA region is the scale and speed of reforms from policymakers across GCC economies.

This includes the opening up of capital markets and the mobilization of the private sector, which has come at a particularly important time given that the growth rate among GCC economies has been fairly modest over the last few years. 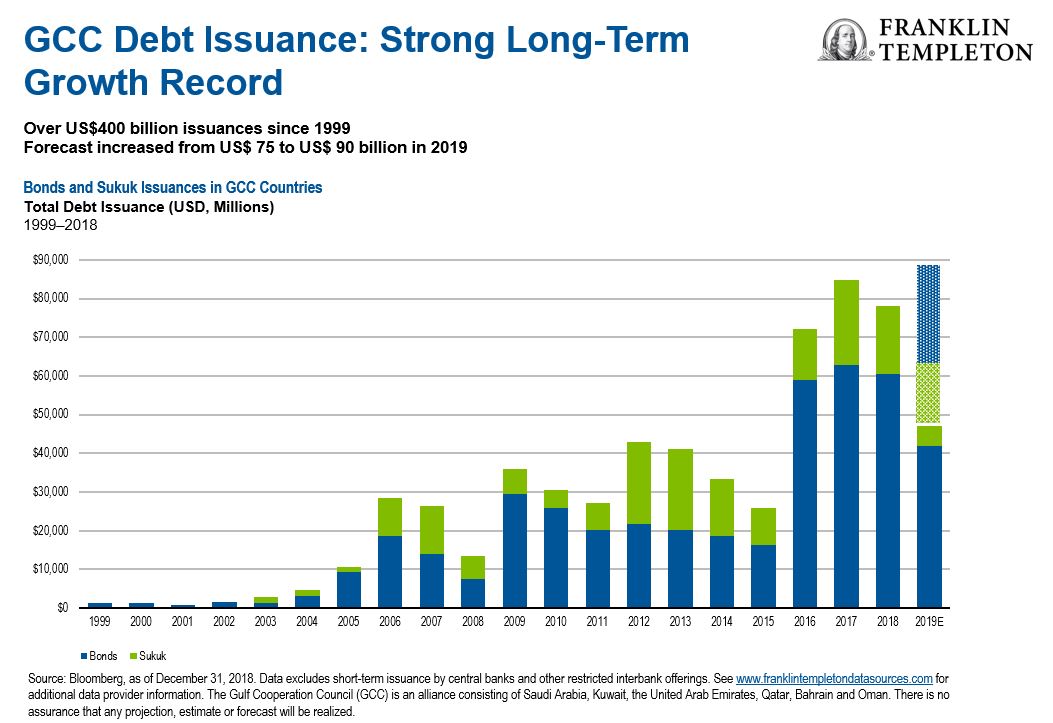 However, we believe GCC policymakers do have the tools to help stimulate economic growth beyond current predicted gross domestic product (GDP) growth rates of 1.5% to 3.5% between 2019 and 2021.3 This includes removing the barriers to foreign trade within the GCC, making financial services more widely available and developing debt markets. We’ll watch closely how policymakers can enact changes without compromising some of the more pressing fiscal consolidation goals they have, particularly the progress they are making on diversifying economies away from oil and into non-oil related sectors such as tourism and financial services.

Some economies, such as Saudi Arabia, have continued to push for financial integration on a global scale. The country recently launched a national industrial development and logistics program to attract around US$426 billion in investment by 2030, in a bid to meet its “Vision 2030” target of integrating its economy on an international scale.

2. Early Stage in the Credit Cycle

We’re also paying close attention to where GCC debt markets are in the credit cycle, especially as some developed markets are at a more advanced stage of their cycle.

GCC bonds are typically denominated in US dollars and tied to the fortunes of the US economy. We think long-term fundamentals are broadly improving in the GCC region, but gross domestic product (GDP) growth is expected to be modest for the next three years, supporting the rationale for fixed income allocations.4 Despite this, we are ultimately mindful that a potential correction in developed markets, such as the United States, could have a knock-on effect on markets in the GCC region, through the transmission of US monetary policy and the price of credit across the globe.

It’s not surprising that US interest rates are on our list of concerns. Markets have priced in at least one interest-rate cut by the US Federal Reserve (Fed) this year, starting from this summer.5 We’re paying special attention to the Fed’s interest-rate trajectory in particular and the impact that can have on longer term rates over the next few years.

The GCC bond market is almost unrecognizable from a decade ago due to capital market development and government efforts to diversify economies away from a reliance on fossil fuels. In our view, a combination of ongoing structural reforms and improving valuations should likely attract additional foreign investment to the economy and continue to drive this trend.

And, according to our research, GCC bonds typically have a low correlation to oil prices and to other fixed income assets, so can offer diversification as well as potentially higher risk-adjusted returns (see chart below).6 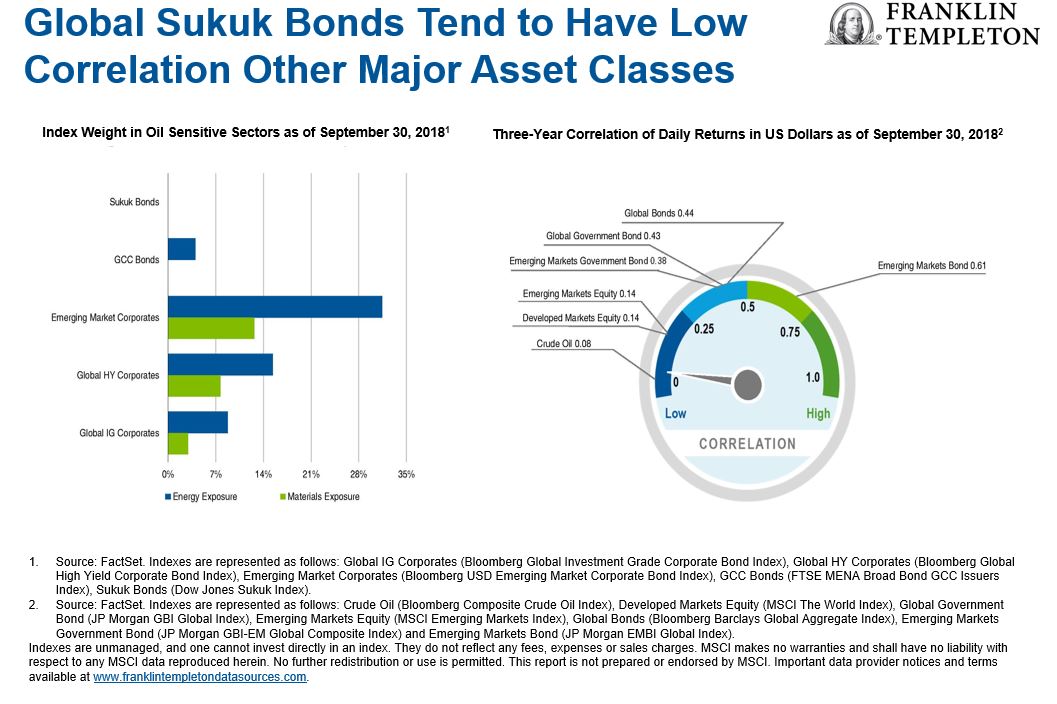 Ultimately, we are constructive in our short- to medium-term view for GCC debt. We’d consider the four aforementioned factors to be at the top of our minds in an asset class that we believe deserves more investor attention.

4. Diversification does not guarantee profit or protect against risk of loss.

6. The J.P. Morgan Emerging Markets Bond Index tracks bonds in emerging markets. Indexes are unmanaged and one cannot directly invest in them. They do not include fees, expenses and sales charges.