The United States and China described their July trade talks as “constructive” and are expected to meet again in September. However, on August 1, US President Donald Trump surprised markets with plans to impose a 10% tariff on the last US$300 billion tranche of imports from China, effective September 1. In retaliation, China halted purchases of US agricultural products and allowed the renminbi to depreciate above the symbolic level of seven to the US dollar, leading the United States to label China a currency manipulator.

The US-China dispute has escalated from trade to technology, and now to financial areas with accusations of currency manipulation. We think the risk of a deepening long-term confrontation is rising. Given prolonged trade tensions, many global companies have been highlighting supply-chain diversification even before the latest developments. While negative for China, this could lead to increased capital expenditure in other Asian markets and beyond.

The recent truce in the US-China trade conflict was notable for its brevity: the increasingly antagonistic stance between the United States and China suggests the trade war will likely persist beyond the 2020 US presidential election cycle. We think investors should be prepared for ongoing market volatility.

However, we believe many fundamentally sound companies can still be found in emerging markets, where the macroeconomic backdrop remains largely healthy. Among companies we favor are those that are nimble in adapting to changes, demonstrate financial resilience (reflected by characteristics such as a strong balance sheet, high cash flows and sustainable earnings) and trade at attractive valuations. 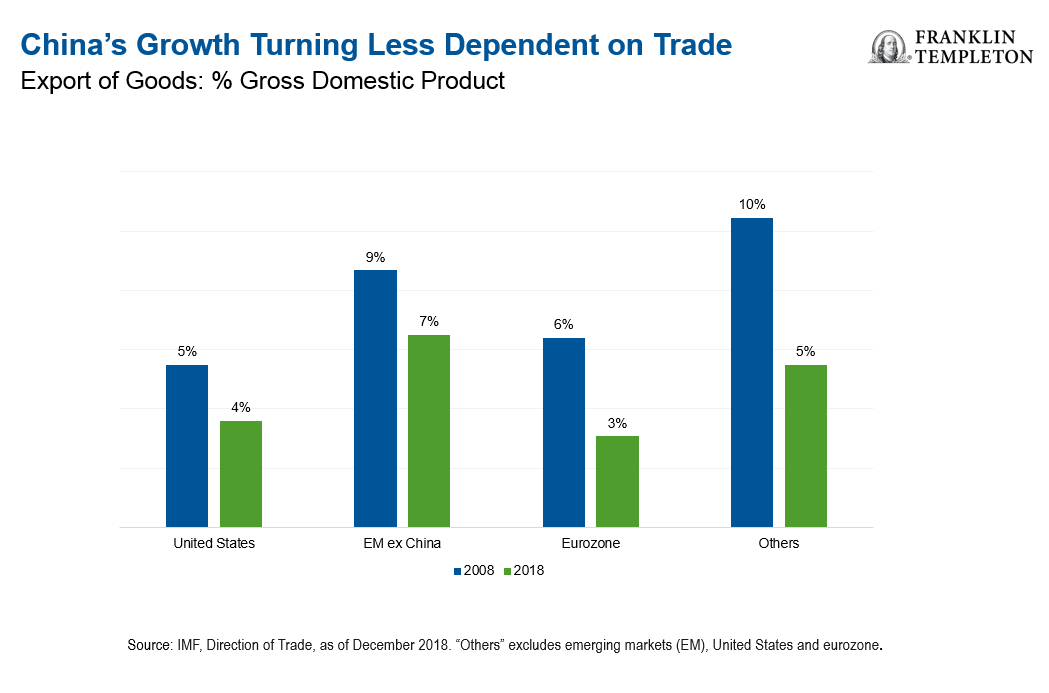 EM equities declined overall in July, while developed market stocks advanced. Market sentiment was largely unsteady amid persistent global trade tensions, a weaker outlook for world economic growth and shifting expectations for the size of a potential US interest rate cut. EM currencies generally weakened against the US dollar. The MSCI Emerging Markets Index lost 1.1% over the month, compared with a 0.5% return in the MSCI World Index, both in US dollars.2

The Most Important Moves in Emerging Markets in July

The companies and case studies shown herein are used solely for illustrative purposes; any investment may or may not be currently held by any portfolio advised by Franklin Templeton Investments.

1.  Source: Bloomberg. Emerging markets represented by the MSCI EM Total Return Index. Past performance is not an indicator or guarantee of future performance. Indexes are unmanaged and one cannot directly invest in them. They do not include fees, expenses or sales charges. See www.franklintempletondatasources.com for additional data provider information.

2.  Source: MSCI. The MSCI Emerging Markets Index captures large- and mid-cap representation across 24 emerging-market countries. The MSCI World Index captures large- and mid-cap performance across 23 developed markets. Indexes are unmanaged and one cannot directly invest in them. They do not include fees, expenses or sales charges. Past performance is not an indicator or guarantee of future results. MSCI makes no warranties and shall have no liability with respect to any MSCI data reproduced herein. No further redistribution or use is permitted. This report is not prepared or endorsed by MSCI. Important data provider notices and terms available at www.franklintempletondatasources.com.