The US-China trade conflict has remained at the forefront of investor concerns in recent months, with both governments imposing tariffs on each other’s goods. While continued tensions are likely to result in continued market volatility, Franklin Templeton Emerging Markets Equity nonetheless finds reasons to be positive about emerging markets, with a more dovish global central bank backdrop offering support.

The US-China trade conflict has remained at the forefront in recent months, with both governments imposing tariffs on each other’s goods. However, it should be emphasized any impact of the trade war has not been limited to China; rather, we have seen a global impact. While the resumption of trade talks expected in October indicates the willingness of both sides to work toward resolving outstanding issues, we remain cautious and expect continued volatility in the interim.

Political turmoil in the United States following the launch of an impeachment inquiry on the US President Donald Trump added to increased market volatility in the interim. However, reduced expectations of further escalation led investors to refocus on the US-China trade dispute and US Federal Reserve (Fed) policy. The Fed has reduced its benchmark rate twice in the last three months, with expectations rising for another rate cut by the end of 2019.

Slowing economic growth expectations, declining inflationary pressures and easing monetary policy in developed economies, including the United States and the eurozone, have led central banks in emerging markets (EMs) to generally turn more dovish this year. We expect this trend to continue with rate cuts in a number of larger EMs, including India, Brazil, Russia and Mexico. Coupled with improving earnings expectations and relatively undemanding valuations and dividend yields, we believe the outlook for EM equities remains attractive. 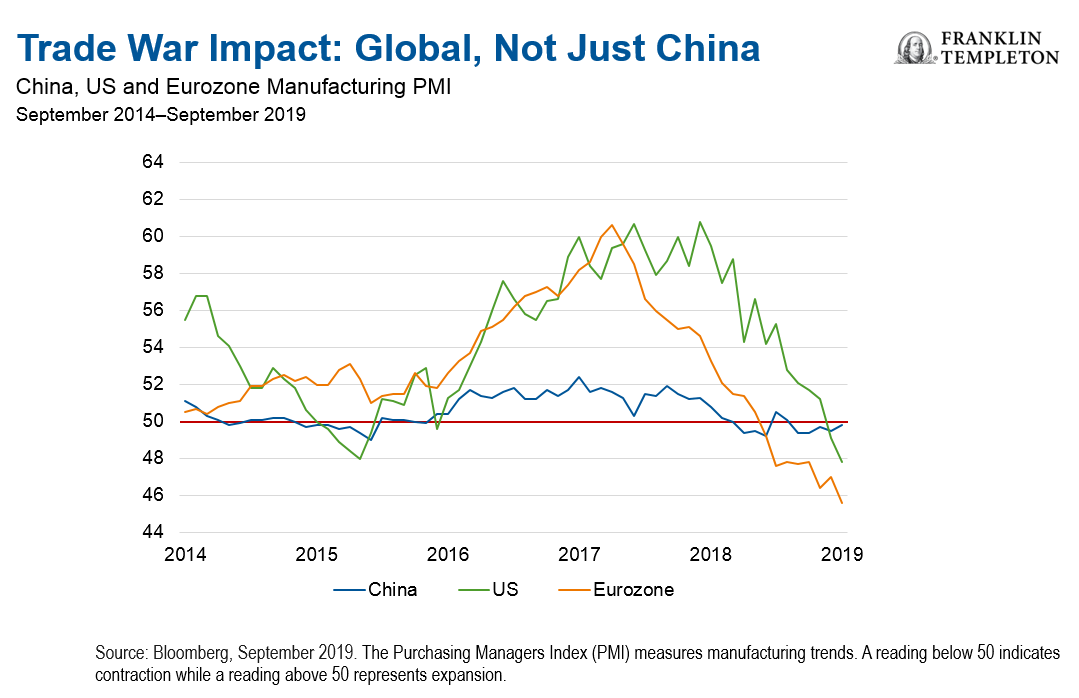 Stock markets worldwide weathered a volatile quarter amid bumpy US-China trade negotiations and global recession fears. Central banks in several major markets, including the United States, cut interest rates to support economic activity. EM equities declined in US-dollar terms, while developed market stocks recorded a modest gain. EM currencies as a whole fell against the US dollar. The MSCI Emerging Markets Index lost 4.1% over the quarter, compared with a 0.7% return in the MSCI World Index, both in US dollars.2

Most Asian markets finished the quarter lower as trade tensions clouded the economic outlook for the region. The US-China trade row remained in focus—both countries announced more tariffs in August but made conciliatory moves in September. An escalating trade dispute between South Korea and Japan added to market uncertainty. Stocks in China and South Korea retreated. In India, equities fell as the economy’s momentum faltered, though corporate tax cuts and other stimulus measures helped stem the decline. Bucking the downtrend, Taiwanese equities rose. Suppliers to Apple were lifted by encouraging pre-orders for the latest iPhone.

Markets in Latin America declined over the quarter with Argentina, Peru and Chile leading the way down. Although declining, Mexico and Brazil performed better than their regional peers. Despite a rebound in September, the Argentine market lost nearly half its value in US dollar terms over the three-month period on increased political uncertainty, debt re-profiling and the imposition of capital controls. Market turmoil, however, remained largely contained to Argentina. Brazil’s central bank lowered its key interest rate by 100 basis points to an all-time low of 5.5% to stimulate the domestic economy. Progress on the reform front further supported investor confidence. In August, Mexico’s central bank reduced its benchmark interest rate for the first time in more than five years, citing weak domestic growth and lower inflation.

The Europe, Middle East and Africa region as a whole lagged their EM peers in the third quarter. South Africa and Poland were among the weakest performers, ending the quarter with double-digit losses. Turkey and Egypt, in contrast, recorded strong returns, while the United Arab Emirates (UAE), Qatar and Russia also outperformed regional peers. The South African Reserve Bank left interest rates unchanged in September, following a 25 basis-point cut in July, as it continued to balance economic growth concerns and inflation expectations. A weaker South African rand also pressured returns in US dollar terms. Attractive valuations in Russia and the UAE supported investor sentiment with some comfort, while a larger-than-expected 150 basis point interest-rate cut amid a downward inflation trend drove returns in Egypt.

The companies and case studies shown herein are used solely for illustrative purposes; any investment may or may not be currently held by any portfolio advised by Franklin Templeton.

2. Source: Source: MSCI. The MSCI Emerging Markets Index captures large- and mid-cap representation across 24 emerging-market countries. The MSCI World Index captures large- and mid-cap performance across 23 developed markets. Indexes are unmanaged and one cannot directly invest in them. They do not include fees, expenses or sales charges. Past performance is not an indicator or guarantee of future results. MSCI makes no warranties and shall have no liability with respect to any MSCI data reproduced herein. No further redistribution or use is permitted. This report is not prepared or endorsed by MSCI. Important data provider notices and terms available at www.franklintempletondatasources.com.