In addition to the toll on human lives, the coronavirus outbreak in China brings potential economic and market implications for China and beyond. Franklin Templeton Emerging Markets Equity team has been monitoring the situation and weighs in with some thoughts, comparing it to the outbreak of SARS in 2003.

This material was updated on February 4, 2020, from its original publication.

We are closely monitoring the impact on emerging market economies and equity markets from the outbreak of the coronavirus in China and other parts of the world. The situation is at an early stage and is evolving quickly. Both market and macro implications depend on the severity and duration of this epidemic episode.

What We Know So Far

Our View of the Economic Impact of the Coronavirus

We think the current events will have a negative impact on sentiment as well as the economy in the short term. In China and Asia, near-term business activity and consumption will likely be significantly impacted as people curtail their movements as a preventive measure. This could result in a materially negative growth print. Our teams on the ground report that people in China have been canceling travel plans, social interactions and outings, leaving restaurants, cinema theaters and hotels empty. There is much-reduced traffic in the transport hubs that are still in operation.

Consumption is a meaningfully more important contributor to the economy than it was in 2003 at the time of the SARS episode, and now accounts for over 70% of China’s gross domestic product (GDP) growth (versus less than 40% in 2003). This leads us to believe the drag on the economy may be more severe in magnitude than what we saw in 2003. However, a recovery may not be as speedy, as China’s economy is now not only much larger in size but also growing at a more modest rate than the double-digit rate experienced 14 years ago.

Sectors such as travel, leisure, retail and select sub-segments of discretionary consumption will likely be directly impacted in the near term. As China has become an integral part of the global supply chain, any further extension of factory closures would raise risks related to temporary supply chain disruptions for multinational companies.

As we believe China’s economic growth will likely be affected for at least one or two quarters, the government may respond to a slowdown in the economy through stimulus measures such as interest rate cuts, or measures to encourage infrastructure spending and/or boost consumption. In early February, Chinese authorities announced the use of various monetary policy tools to ensure liquidity remains reasonably ample during the special period of virus control. In the very near term though, the government’s efforts will likely remain focused on containing the spread of the virus.

While we monitor the situation, we currently believe the long-term growth outlook for China and Chinese equities remains unchanged. The mass adoption of technology, rising consumption and premiumization (rising consumer demand for premium goods), manufacturing upgrades and government reforms should help the country emerge from this challenging period stronger and more self-reliant, with multiple pillars of economic support.

Likewise, we remain positive about the prospects for Asian equities in the long run, with a focus on quality names with sustainable earnings power.

Our View on the Equity Market Implications 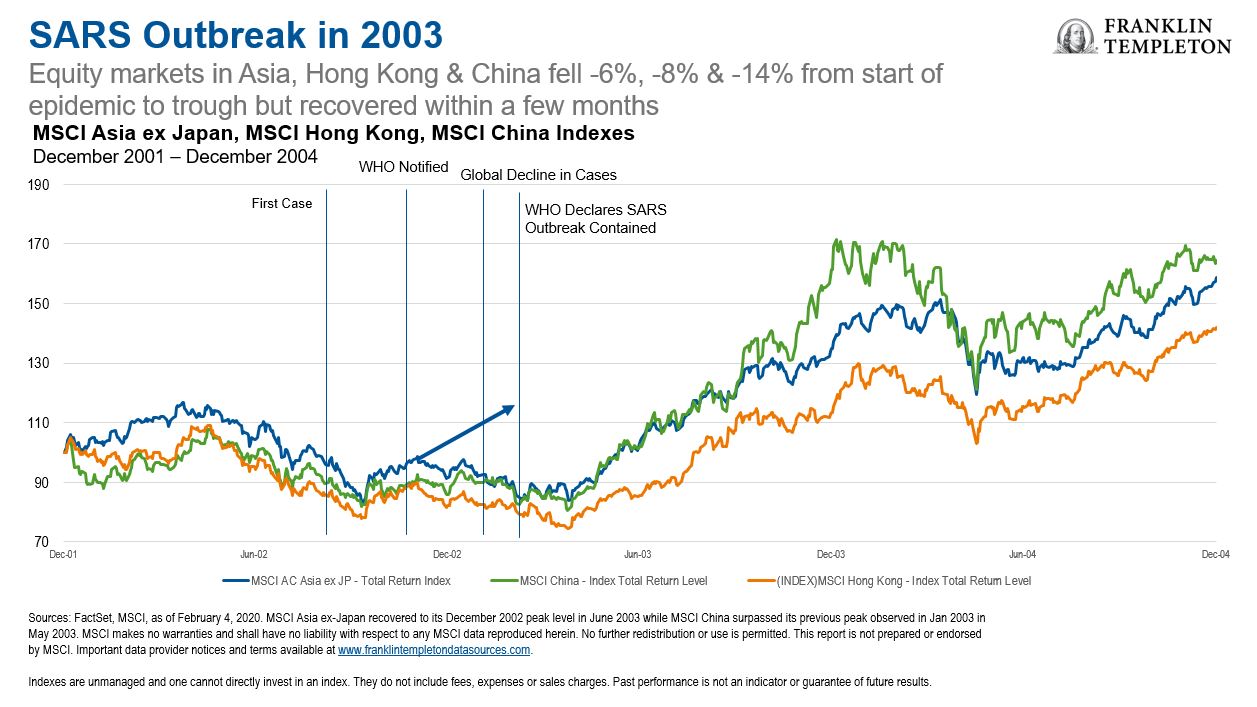 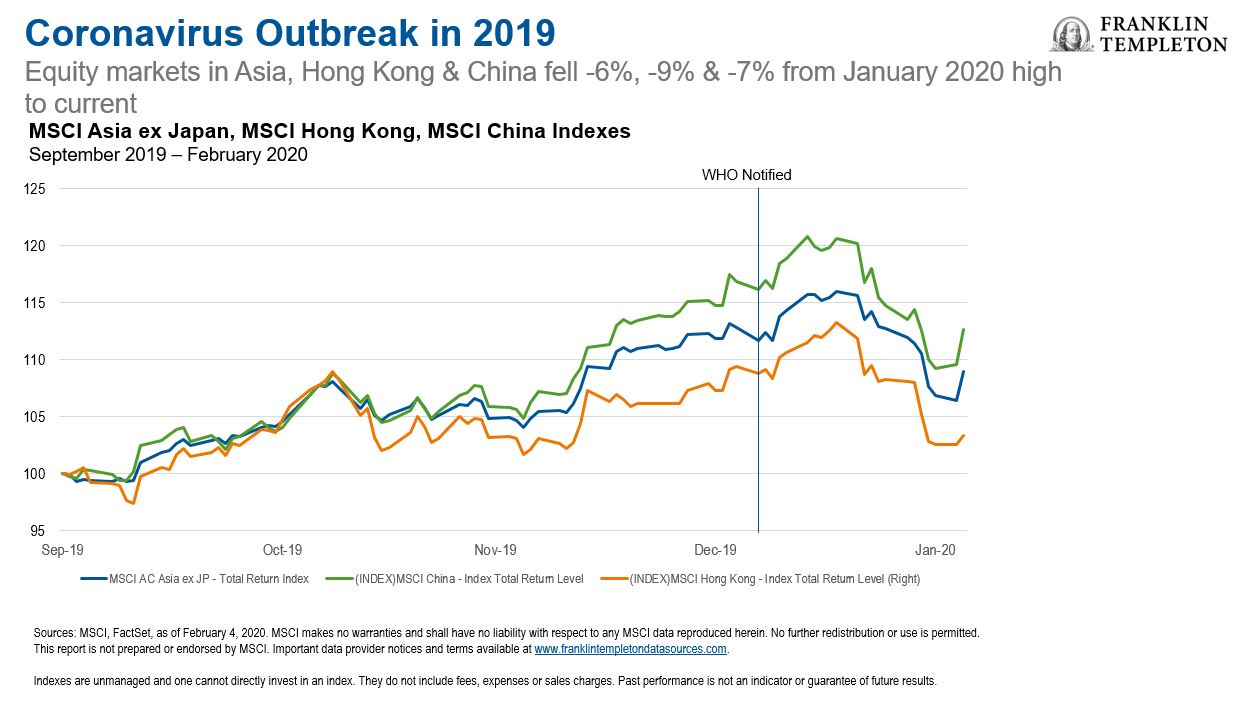 In sum, the situation remains fluid and may further worsen in the near term. The rapid development of the 2019 coronavirus has brought some uncertainty to the near-term global growth outlook. However, in our current assessment, downside risks are biased toward the short term, while our long-term market and economic outlook remains intact.

This material is intended to be of general interest only and should not be construed as individual investment advice or a recommendation or solicitation to buy, sell or hold any security or to adopt any investment strategy. It does not constitute legal or tax advice. The views expressed are those of the investment manager(s) and the comments, opinions and analyses are rendered as of the publication date and may change without notice.

Data from third party sources may have been used in the preparation of this material and Franklin Templeton Investments (“FTI”) has not independently verified, validated or audited such data. FTI accepts no liability whatsoever for any loss arising from use of this information and reliance upon the comments opinions and analyses in the material is at the sole discretion of the user.

This is not a complete analysis of every material fact regarding any industry, security or investment and should not be viewed as an investment recommendation. This is intended to provide insight into the portfolio selection and research process. Factual statements are taken from sources considered reliable, but have not been independently verified for completeness or accuracy. These opinions may not be relied upon as investment advice or as an offer for any particular security.

Past performance does not guarantee future results.

Products, services and information may not be available in all jurisdictions and are offered outside the US by other FTI affiliates and/or their distributors as local laws and regulation permits. Please consult your own professional adviser or Franklin Templeton institutional contact for further information on availability of products and services in your jurisdiction.

All investments involve risks, including possible loss of principal. Stock prices fluctuate, sometimes rapidly and dramatically, due to factors affecting individual companies, particular industries or sectors, or general market conditions. Special risks are associated with foreign investing, including currency fluctuations, economic instability and political developments; investments in emerging markets involve heightened risks related to the same factors. To the extent a strategy focuses on particular countries, regions, industries, sectors or types of investment from time to time, it may be subject to greater risks of adverse developments in such areas of focus than a strategy that invests in a wider variety of countries, regions, industries, sectors or investments.

3. Sources: S&P Dow Jones Indices, MSCI. MSCI makes no warranties and shall have no liability with respect to any MSCI data reproduced herein. No further redistribution or use is permitted. This report is not prepared or endorsed by MSCI. Important data provider notices and terms available at www.franklintempletondatasources.com. Indexes are unmanaged and one cannot directly invest in them. They do not include fees, expenses or sales charges. Past performance is not an indicator or guarantee of future results.