Falling oil prices can be a double-edged sword in terms of economic impact: welcomed by consumers, but not by producers. Franklin Templeton Emerging Markets Equity’s Bassel Khatoun shares his thoughts on the impact of lower oil prices on emerging market economies and some considerations for investors. 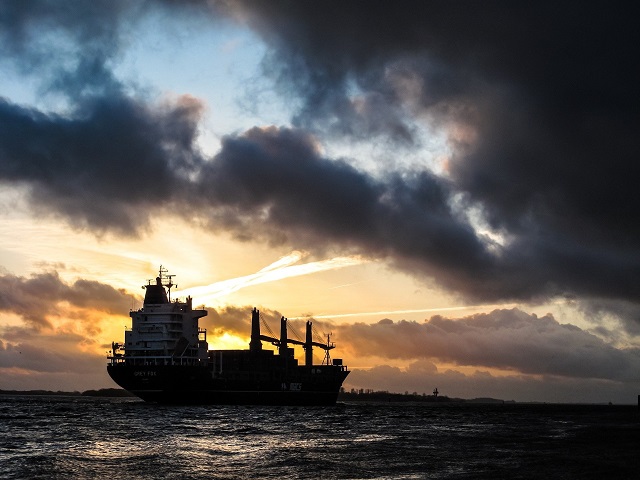 The collapse in OPEC+1 negotiations over the weekend of March 7 and Saudi Arabia’s subsequent, aggressive undercutting of its official selling prices signals a break from four years of cohesion and co-ordination in oil strategy. Once again, Saudi Arabia has effectively abandoned its role as swing producer, sparking a price war which has the potential to inflict major costs if sustained for a prolonged period. This compounded the impact on oil markets of slowing demand amid a dip in global economic growth due to the spreading coronavirus. The result was a March 9 plunge in oil prices—the largest one-day oil price decline since the 1991 Gulf war.

Saudi Arabia’s foreign reserves of over US$500 billion (73% of gross domestic product [GDP]) and significant further debt-raising capacity (given debt-to-GDP of merely 25%) means the country has enough financial capacity to withstand oil prices in the US$30-$40 per barrel (bbl) range for several quarters.2

In our view, Russia likely has the greater ability to sustain lower oil prices, having substantially raised reserves in recent years, with US$436 billion in foreign exchange (see chart below) and zero net public debt, while conservative budget assumptions were made regarding both the oil price and exchange rate. However, the added geopolitical dimension to Russia’s behavior, involving retaliation against recently imposed US sanctions and more generally countering the rising market share of shale, adds to uncertainty.

Saudi Arabia and Russia compete at the very bottom of the cost curve in terms of lifting costs (i.e., from existing wells) as well as full-cycle costs (which capture all costs of production). However, at current production levels, Saudi Arabia’s fiscal breakeven oil price stands at US$83/bbl, which is roughly double the US$42/bbl of Russia (see chart below). Moreover, Saudi domestic political sensitivity to economic stress is much higher than that of Russia given the importance of public project spending and welfare provision, suggesting this move is a high-stakes gamble by the Saudis. 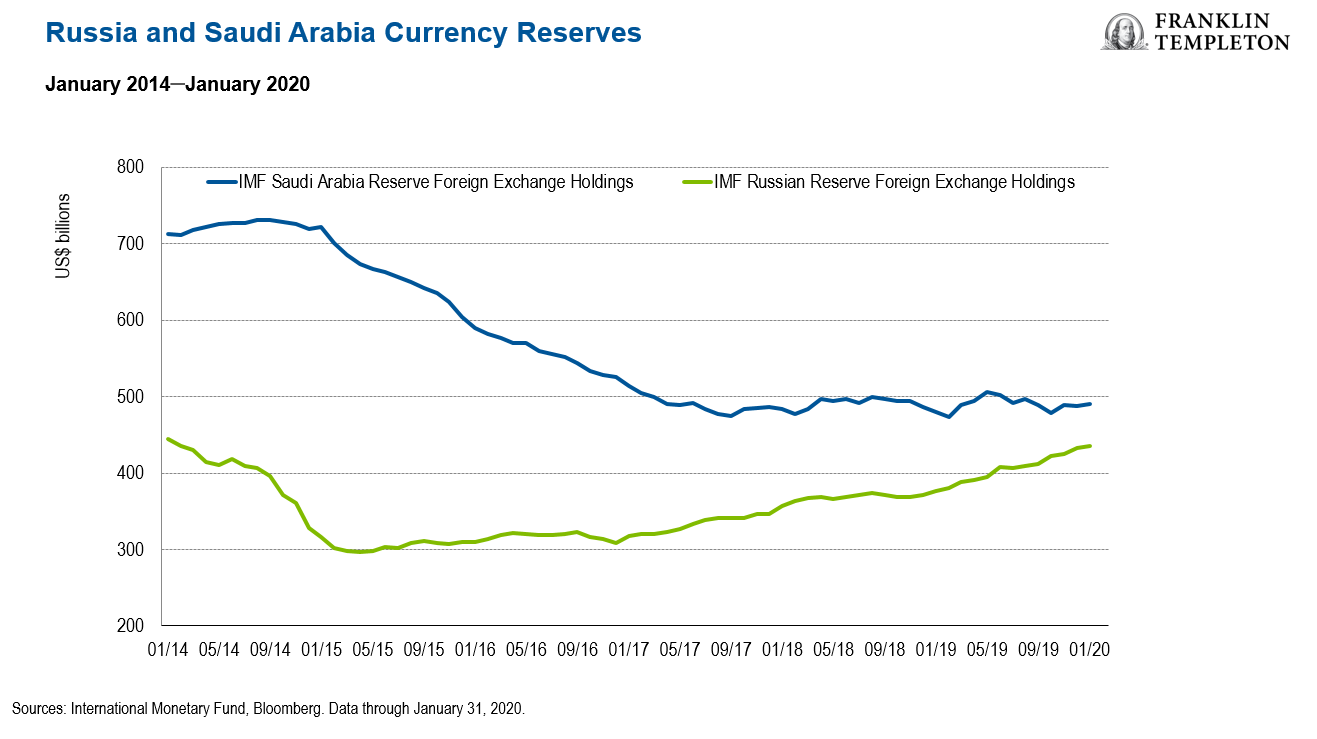 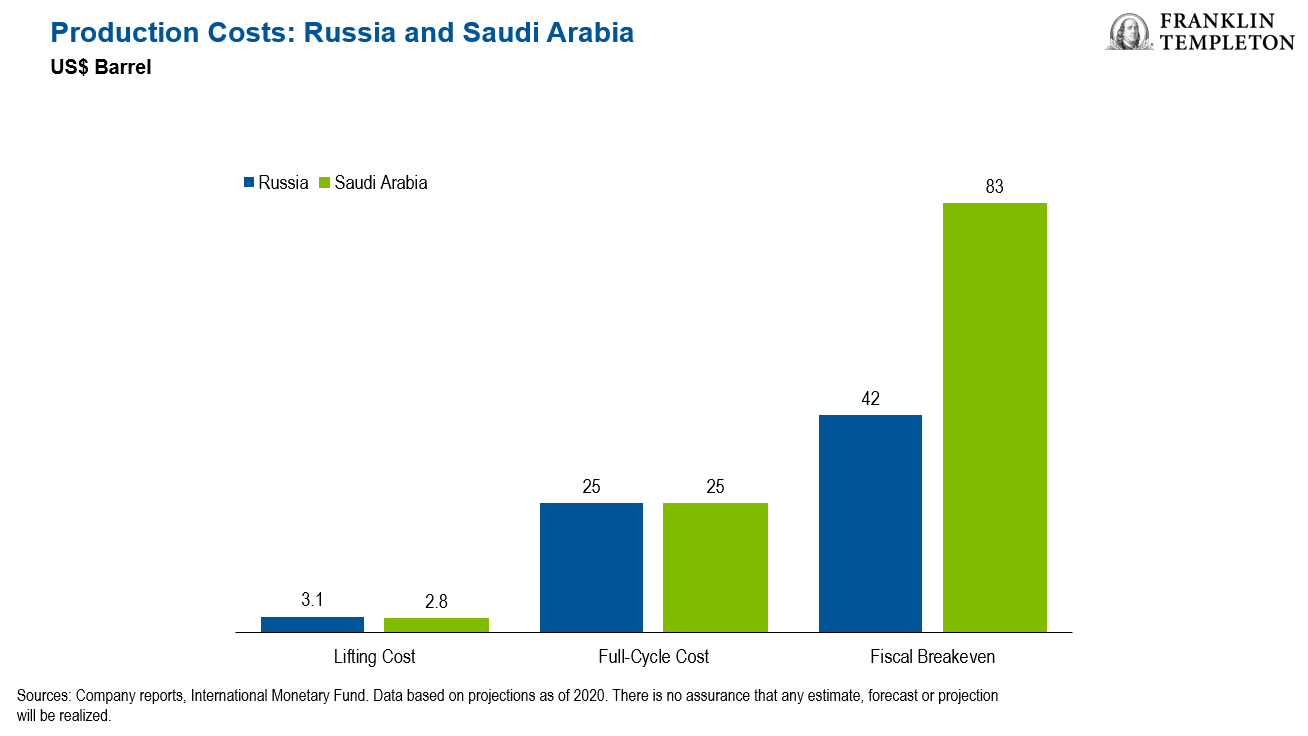 The Gulf Corporation Council (GCC) countries will likely be most impacted, which, according to the International Monetary Fund, require an oil price varying between US$45-$100/bbl for fiscal breakeven points.3 In Africa, Nigeria appears to be at greatest risk of currency devaluation in this environment.

In Latin America, Pemex, the state-owned oil producer in Mexico, has considerable debt and employee obligations, which will be difficult to service. However, the Mexican government has low leverage and therefore any intervention should be manageable, in our view.

In Brazil, while the market reaction has been extreme, government reform efforts across the economy, including a specific focus on the oil industry in terms of privatizing assets and deleveraging, should mitigate some of the negative impact.

We believe Asia is of greatest significance, where most countries are net oil and gas importers (except Malaysia where the budget, growth and currency will come under pressure). For giants such as India and China, lower oil prices will considerably support current accounts and currencies while easing inflationary pressures, enabling supportive monetary policy. In addition, lower energy costs act as a direct stimulus to consumers and most businesses.

Outside of emerging markets, costs in the US shale industry are on average higher than current oil prices, while funding from credit markets had already been weakening. While US shale has proven resilient in the past, the current oil price collapse may result in more mergers and buyouts by majors, in turn driving a greater focus on cash returns to shareholders rather than production growth. This dynamic will likely impact all high-cost producers: offshore and projects in Brazil, the Gulf of Mexico, the North Sea as well as oil sands in Canada.

We view prolonged lower oil prices, driven by extended demand weakness and continued oversupply, as a tail risk. We expect global oil prices to hover around US$30/bbl in the second and third quarters of this year, but believe they will likely move back up toward US$40-$50/bbl by year-end, and thereafter could normalize in the US$50-$60/bbl range.

The negative near-term impact upon energy companies, as well as the secondary effect on economic growth in oil-exporting countries, could be considerable. That said, the oil price crash in the last decade  resulted in a sustained period of company (and fiscal) deleveraging, paired with improved cost control as well as encouraging greater caution towards the sector; our holdings are limited to companies we consider top tier, often with lower oil price beta.

Of these companies, in Russia, for example, a company we favor benefits from a strong balance sheet and generous dividend policy, reflective of considerably improved corporate governance in recent years— we estimate a resilient free cash flow yield of 6% at US$30/bbl oil. We also have positive views on upstream players in China and Thailand, where when conservatively factoring in a prolonged scenario of US$30/$30/$55/bbl oil in 2020/2021/2022 onwards, we find that intrinsic value exceeds current share prices. These are, in our view, high-quality and efficient players, able to breakeven or be profitable in a US$30/bbl scenario, with defensive balance sheets or earnings from natural gas production supporting continuity of dividends.

In the Middle East, during 2016-2018, Saudi Arabia was able to successfully implement meaningful reforms, including the removal of certain subsidies, the introduction of taxation and increased costs on businesses. A return to these measures across the region would be a risk for our predominantly domestically orientated exposures.

Overall, however, the vast majority of emerging markets, whether measured by population, GDP or market capitalization, will benefit from the oil price collapse despite the near-term negative market reaction.

In an environment of slowing economic growth due to the coronavirus, lower oil prices represent a substantial additional stimulus to the broader asset class, particularly within Asia. Our portfolios are predominantly positioned in domestic-orientated consumer and technology businesses, plus world-leading semiconductor manufacturers—all of which stand to see benefits from lower energy costs.

The views expressed are those of the investment manager and the comments, opinions and analyses are rendered as of publication date (or specific date in some cases) and may change without notice. The information provided in this material is not intended as a complete analysis of every material fact regarding any country, region or market.

Data from third party sources may have been used in the preparation of this material and Franklin Templeton (“FT”) has not independently verified, validated or audited such data. FT accepts no liability whatsoever for any loss arising from use of this information and reliance upon the comments, opinions and analyses in the material is at the sole discretion of the user.

1.  OPEC+ is an alliance of oil producers, including members and non-members of the Organization of the Petroleum Exporting Countries.

3. The Gulf Cooperation Council is an alliance between six Middle Eastern countries: Bahrain, Kuwait, Oman, Qatar, Saudi Arabia and the United Arab Emirates (UAE). There is no assurance that any projection, estimate or forecast will be realized.