The Franklin Templeton Emerging Markets Equity team offers an overview of how the coronavirus has impacted emerging markets over the past month, and shares their latest outlook.

While the United States and Europe are just beginning to feel the economic impact of COVID-19, China is starting to recover. We expect China to perform relatively better than its global counterparts, but without a global coordinated response to both demand and supply shocks (which at the moment looks unlikely given the current US-China and Saudi Arabian-Russian relations), we may be facing negative global growth for 2020.

The longer-term outcome will depend on the degree and duration of demand destruction in developed countries. The impact on supply chains of key technology, health care and industrial products—and the degree to which end customers are willing to pay more for greater security of supply—are key questions. Companies, such as those in the technology space, that could benefit from permanent behavioral changes (such as an increase in e-commerce, e-learning and cloud computing) are likely to be more strongly embraced.

Across our portfolios, we are positioned in long-term themes including consumption premiumization, digitalization, health care and technology. In the short term, COVID-19 is accelerating the adoption of products or behaviors that are beneficial for some of these long-term themes.

Stocks worldwide tumbled in a volatile quarter, with emerging market (EM) equities falling more than their developed market counterparts. The escalation of a China-centered coronavirus outbreak into a global pandemic disrupted segments of the world economy and fanned recession fears. Governments and central banks stepped in with massive fiscal and monetary stimulus. In a separate adverse development, energy prices plunged amid softer demand and the collapse of a supply pact among major energy producers. EM currencies were broadly weaker against the US dollar. In the first quarter, the MSCI Emerging Markets Index declined 23.6%, while the MSCI World Index fell 20.9%, both in US dollars.2 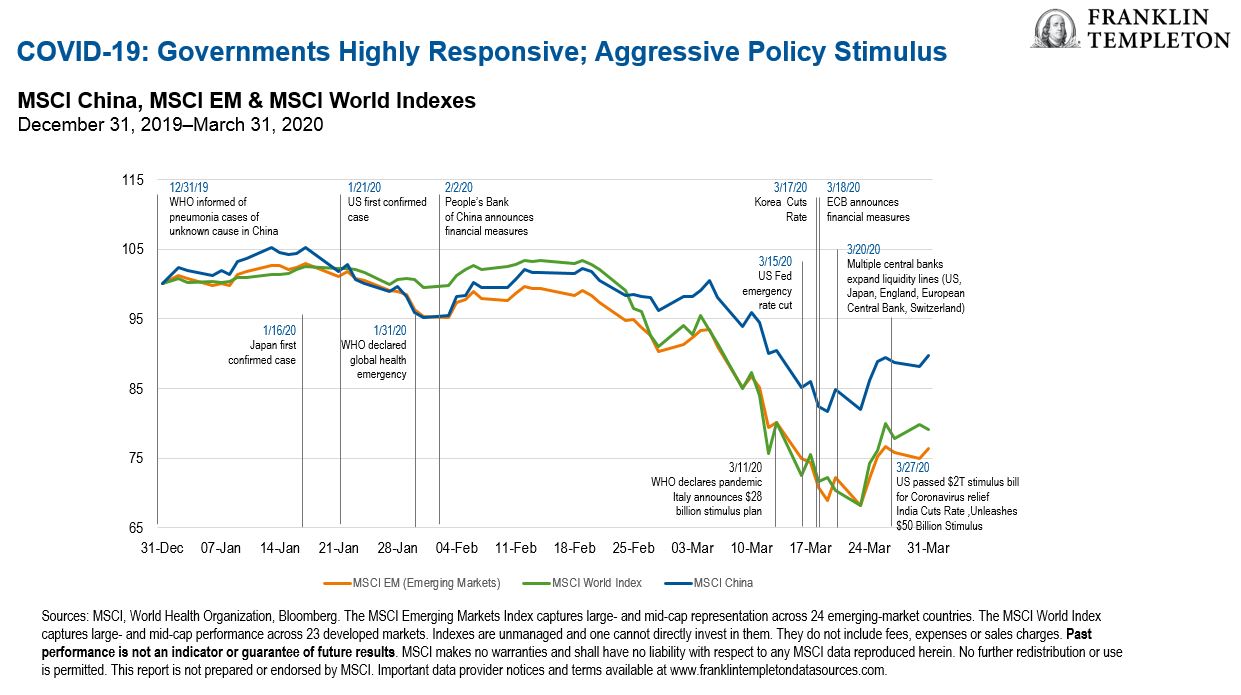 Asian stocks endured a selloff in the quarter amid a rapid rise in coronavirus infections outside China. Investors counted the economic costs of travel restrictions, supply chain disruptions and weaker demand, while policymakers unveiled fiscal support, interest-rate cuts, lower reserve requirements for banks, and other relief measures. China’s stock market fell, but pared some losses toward quarter-end as the country appeared to contain the virus and economic activity appeared to gradually improve. South Korea also showed results in slowing the virus’ spread. To cushion the economy, the authorities cut the benchmark interest rate to a record low and announced relief packages for households and businesses. Several other markets continued to contend with a jump in infections. Indonesia declared a public health emergency and downgraded its economic outlook. Thailand’s central bank warned of a contraction for the tourism-reliant economy this year.

Fears over the economic impact of COVID-19 and an oil price war that saw oil prices fall sharply in March made Latin America the worst-performing region for the quarter. Depreciation in domestic currencies also accounted for a large part of the decline in US dollar terms. Brazilian equities fell 50% over the three-month period in US dollar terms, making it the region’s worst performer. The government announced measures to support the population and economy, while the central bank lowered its key interest rate to a record-low of 3.75% to help mitigate the effects of the outbreak. Losing about a third of their value in US dollar terms, Chile, Mexico and Peru fared relatively better. Following a 0.25% rate cut in February, the Bank of Mexico cut its benchmark interest rate by 0.5% and announced several measures to support financial markets in an extraordinary meeting in March. The adoption of early preventive measures to slow the spread of COVID-19, interest rate cuts and strong stimulus measures supported investor sentiment in Chile and Peru.

In line with their global peers, markets in the Europe, Middle East and Africa region lost ground over the quarter as fears over the economic impact of social distancing policies implemented amid the COVID-19 outbreak weighed on financial markets. The collapse in oil prices in March further weighed on the Russian market. Policymakers, however, announced a range of measures to support households and businesses affected by mobility restrictions. The Constitutional reform vote scheduled for April 22 was also postponed. The South African market was among the weakest markets in the region, with a devaluation in the rand partly to blame. A sovereign credit rating cut to sub-investment grade by international rating agency Moody’s compounded concerns. The South African Reserve Bank announced a number of quantitative easing measures including a higher-than-expected 1.0% rate cut in March amid growing worries, as the country embarked upon a 21-day lockdown to slow the local transmission of COVID-19. This followed a 0.25% rate cut in January. Qatar, Saudi Arabia and Egypt, however, fared better than their regional peers.

Scroll over the map to view comments on the countries indicated and our sentiment.
Green = positive, Red = negative, Blue = neutral

The views expressed are those of the investment manager and the comments, opinions and analyses are rendered as of publication date and may change without notice. The information provided in this material is not intended as a complete analysis of every material fact regarding any country, region or market.

Data from third party sources may have been used in the preparation of this material and Franklin Templeton (“FT”) has not independently verified, validated or audited such data. FT-s accepts no liability whatsoever for any loss arising from use of this information and reliance upon the comments, opinions and analyses in the material is at the sole discretion of the user.

All investments involve risks, including possible loss of principal. Stock prices fluctuate, sometimes rapidly and dramatically, due to factors affecting individual companies, particular industries or sectors, or general market conditions. Special risks are associated with foreign investing, including currency fluctuations, economic instability and political developments; investments in emerging markets involve heightened risks related to the same factors. To the extent a strategy focuses on particular countries, regions, industries, sectors or types of investment from time to time, it may be subject to greater risks of adverse developments in such areas of focus than a strategy that invests in a wider variety of countries, regions, industries, sectors or investments.

1. OPEC+ is an alliance of oil producers, including members and non-members of the Organization of the Petroleum Exporting Countries.

2. Source: MSCI. The MSCI Emerging Markets Index captures large- and mid-cap representation across 24 emerging-market countries. The MSCI World Index captures large- and mid-cap performance across 23 developed markets. Indexes are unmanaged and one cannot directly invest in them. They do not include fees, expenses or sales charges. Past performance is not an indicator or guarantee of future results. MSCI makes no warranties and shall have no liability with respect to any MSCI data reproduced herein. No further redistribution or use is permitted. This report is not prepared or endorsed by MSCI. Important data provider notices and terms available at www.franklintempletondatasources.com.